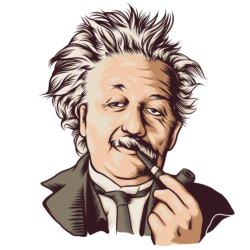 Aha! Albert Einstein, what can one say about the man whose name is now synonymous with genius? Einstein was a physicist who developed the general theory of relativity. They say "Albert is considered one of the most influential scientists of the 20th century." but we would easily consider him the most well-known scientist throughout modern history! Check out his legendary quotes.. you Einstein you!

Confusion of goals and perfection of means seems, in my opinion, to characterize our age.

I want to know all Gods thoughts; all the rest are just details.

Most people say that it is the intellect which makes a great scientist. They are wrong: it is character.

The gift of fantasy has meant more to me than my talent for absorbing positive knowledge.

We should take care not to make the intellect our god; it has, of course, powerful muscles, but no personality.

He who can no longer pause to wonder and stand rapt in awe, is as good as dead; his eyes are closed.

Insanity: doing the same thing over and over again and expecting different results.

Only one who devotes himself to a cause with his whole strength and soul can be a true master. For this reason mastery demands all of a person.

The only reason for time is so that everything doesn't happen at once.

An empty stomach is not a good political adviser.

I do not believe that civilization will be wiped out in a war fought with the atomic bomb. Perhaps two-thirds of the people of the earth will be killed.

Joy in looking and comprehending is nature's most beautiful gift.

Small is the number of people who see with their eyes and think with their minds.

Do not worry about your difficulties in Mathematics. I can assure you mine are still greater.

If A is a success in life, then A equals X plus Y plus Z. Work is X; Y is play, and Z is keeping your mouth shut.

Mozart's music is so pure and beautiful that I see it as a reflection of the inner beauty of the universe.

The grand aim of all science is to cover the greatest number of empirical facts by logical deduction from the smallest number of hypotheses or axioms.

We still do not know one thousandth of one percent of what nature has revealed to us.

A clever person solves a problem. A wise person avoids it.

He who joyfully marches to music in rank and file has already earned my contempt. He has been given a large brain by mistake, since for him the spinal cord would suffice.

Intellectual growth should commence at birth and cease only at death.

Only two things are infinite, the universe and human stupidity, and I'm not sure about the former.

The only source of knowledge is experience.

Anger dwells only in the bosom of fools.