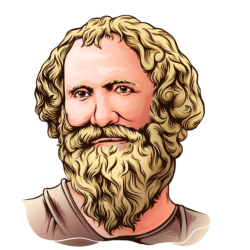 Archimedes was a Greek mathematician, physicist, astronomer and inventor and was born in 287 BC in Syracruse. He is regarded as one of the greatest mathematicians of all times, and is responsible for proving a number of important theorems including the area of a circle, surface area and volume of a sphere, the area of a spiral, amongst many others, and two of his greatest achievements were deriving an accurate approximation of pi and establishing the theorem that bears his name. He is also credited with designing many innovative machines, including the screw pump, compound pulleys and war machines used in his times. One of his most famous quotations is his exclamation of “Eureka” upon discovering the principle of buoyancy, a folklore popular even till today.

The centre of gravity of any cylinder is the point of bisection of the axis.

The centre of gravity of any parallelogram lies on the straight line joining the middle points of opposite sides.

Give me a lever long enough and a fulcrum on which to place it, and I shall move the world.

How many theorems in geometry which have seemed at first impracticable are in time successfully worked out!

The shortest distance between two points is a straight line.

I am persuaded that this method [for calculating the volume of a sphere] will be of no little service to mathematics. For I foresee that once it is understood and established, it will be used to discover other theorems which have not yet occurred to me, by other mathematicians, now living or yet unborn.

There are things which seem incredible to most men who have not studied Mathematics.

It follows at once from the last proposition that the centre of gravity of any triangle is at the intersection of the lines drawn from any two angles to the middle points of the opposite sides respectively.

Those who claim to discover everything but produce no proofs of the same may be confuted as having actually pretended to discover the impossible.

Man has always learned from the past. After all, you can't learn history in reverse!

Many people believe that the grains of sand are infinite in multitude ... Others think that although their number is not without limit, no number can ever be named which will be greater than the number of grains of sand. But I shall try to prove to you that among the numbers which I have named there are those which exceed the number of grains in a heap of sand the size not only of the earth, but even of the universe

Mathematics reveals its secrets only to those who approach it with pure love, for its own beauty.

Rise above oneself and grasp the world.