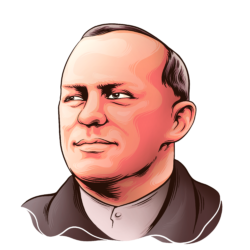 Claude M. Bristol is the best-selling author of the book “The Magic of Believing”, which has sold over a million copies. He served as a soldier in World War One, in France and Germany, following which he worked as a journalist for the army newspaper, as well as a police reporter and church editor for a city newspaper. With the success of his books, he became a popular speaker at clubs and other organizations, inspiring people from all walks of life on the power of achieving goals through mental visualization.

To become the person you would like to be, you create a mental picture of your newly conceived self, and if you continue to hold it, the day will come when you are in reality, that person.

What the fool cannot learn, he laughs at, thinking that by his laughter he shows superiority instead of latent idiocy.

All great men, are men of quick decision.

Men and women remain in minor clerical positions all of their lives because they never display initiative in their work, never attempt to find new ways of doing their work, and never suggest improvements.

What you believe yourself to be, you are.

No one ever defeated a resolute will. Even death stands still before such a will.

What you exhibit outwardly, you are inwardly.

Everything we have in the modern world is the result of desire. Indeed, desire is the motivating force of life itself.

One secures the gold of the spirit when he finds himself.

Whatever we fix our thoughts upon, or steadily focus our imaginations upon, that is what we attract.

History is replete with the stories of strong-minded, resolutely willed individuals, who, steadfastly holding to their inner convictions, have been able to inspire their fellow-man, and in the face of tremendous and determined opposition have literally created out of nothing great businesses, huge empires, and new worlds.

Positive creative thought leads to action and ultimate realization, but the real power, much more than action itself, is the thought. Remember always: Whatever man can conceive mentally, he can bring into materialization.

Whether we know it or not, we are all engaged in the selling of something; if not our wares, then our personalities, our services, our ideas.

However, I would like to point out that hard work alone will not bring success. The world is filled with people who have worked hard but have little to show for it. Something more than hard work is necessary: It is creative thinking and firm belief in your ability to execute your ideas. The successful people in history have succeeded through their thinking. Their hands were merely helpers to their brains.

Repetition of negative thoughts will discourage even the most powerful if continued long enough, and unless your mind is closed against them and you counteract them by constantly thinking and radiating positive thoughts, you will sooner or later find yourself sunk.

You have to think big to be big.

Success is a matter of never ceasing application . You must forever work at it diligently. Otherwise it takes wings and flies away.

You must have a mental pattern clearly drawn in your mind. Ask yourself, where am I headed? What is my goal? Have I visualized just what I really want? If success is to be measured in terms of wealth, can you fix the amount in figures? If in terms of achievement, can you specify it definitely?

The more interest you take in your work, naturally the more attention you give it, and the greater are the results.

It is the image created in his mind that gives reality to the world outside of him.