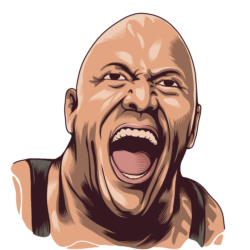 A retired professional wrestler known for the name “The Rock” is now rocking in movies with his mighty appearance and breath-taking action. He played the lead role in several high-grossing films such as Jumanji, The Fast and Furious, Skyscraper and Rampage. On his way to success, Dwayne had a lot of motivational words to share about hard work, obstacles, and steps to win over failure.

I want someone who can trust that my big hands are going to take care of them.

Be the person that when your feet touch the floor in the morning the devil says, awe shit, they're up.

My goal was never to be the loudest or the craziest. It was to be the most entertaining.

Not only do I think being nice and kind is easy, but being kind, in my opinion is important.

Let your actions do your talking for you.

Blood, sweat and respect. First two you give, last one you earn.

By 23 years old, I failed at achieving the biggest dream of my life. My ass was kicked and I was down, but not out. I refused to give up, got back up and pushed on.

You either play the game or let the game play you.

When You Walk Up To Opportunity's Door: Don't Knock It.

I have a little belief that success is never unrelenting. And if success is what we chase, then neither are we.

I never want to just play in the game, I want to change the way the game is played.

The first step to achieving your goal, is to take a moment to respect your goal. Know what it means to you to achieve it.

Vision, guts and enthusiasm. Three qualities I feel you always gotta have to have a shot at success.

Be humble. Be hungry. And always be the hardest worker in the room.

The road to success and greatness is always paved with consistent hard work. Outwork your competitors, be authentic, and above all else, chase your greatness.

If something stands between you and your success, move it. Never be denied.

I like to use the hard times of the past to motivate me today.

All successes begin with Self-Discipline. It starts with you.

With drive and a bit of talent, you can move mountains.

One of the most important things you can accomplish is just being yourself.

I like the idea of working in different genres and transcending genres and hopefully finding success, and ultimately make movies people like.