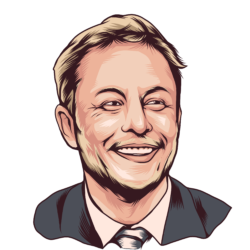 Elon Musk Is a business magnate, industrial designer, engineer, and philanthropist who co-founded Paypal and SpaceX. At an early age, he already showed notable talent in computers. When he was 12 years old, he was able to create a video game and sold it to a computer magazine. His interest in technology inspired him to become one of the major investors of Tesla Motors.

I came to the conclusion that we should aspire to increase the scope and scale of human consciousness in order to better understand what questions to ask. Really, the only thing tht makes sense is to strive for greater collective enlightenment.

If you get up in the morning and think the future is going to be better, it is a bright day. Otherwise, it's not.

The first step is to establish that something is possible then probability will occur.

Starting and growing a business is as much about the innovation, drive, and determination of the people behind it as the product they sell.

When something is important enough, you do it even if the odds are not in your favour.

Any product that needs a manual to work is broken.

I think we have a duty to maintain the light of consciousness to make sure it continues into the future.

It is important to view knowledge as sort of a semantic tree -- make sure you understand the fundamental principles, ie the trunk and big branches, before you get into the leaves/details or there is nothing for them to hang on to.

I take the position that I'm always to some degree wrong, and the aspiration is to be less wrong.

Failure is an option here. If things are not failing, you are not innovating enough.

You get paid in direct proportion to the difficulty of problems you solve.

They were building a Ferrari for every launch, when it was possible that a Honda Accord might do the trick.

I think it's very important to have a feedback loop, where you're constantly thinking about what you've done and how you could be doing it better.

Constantly think about how you could be doing things better.

I think it would be great to be born on Earth and die on Mars. Just hopefully not at the point of impact.

It's OK to have your eggs in one basket as long as you control what happens to that basket.

I'm not trying to be anyone's savior. I'm just trying to think about the future and not be sad.

One of the biggest mistakes we made was trying to automate things that are super easy for a person to do, but super hard for a robot to do.

It is possible for ordinary people to choose to be extraordinary.

You need to live in a dome initially, but over time you could terraform Mars to look like Earth and eventually walk around outside without anything on... So it's a fixer-upper of a planet.

If you need inspiration, don't do it.

Life is too short for long-term grudges.

No, I don't ever give up. I'd have to be dead or completely incapacitated.