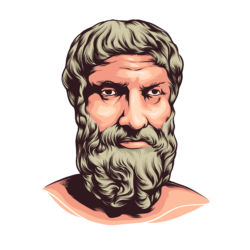 Epictetus Who would have thought that a born slave like Epictetus would turn out to be one of the greatest philosophers of all time? He was a slave in a wealthy household in Hierapolis. His owner allowed him to pursue his studies from which he learned philosophy. Epictetus obtained his freedom after the death of the Roman emperor Nero. Once free, he started teaching philosophy in Rome for 25 years.

You may be always victorious if you will never enter into any contest where the issue does not wholly depend upon yourself.

The greater the difficulty the more glory in surmounting it. Skillful pilots gain their reputation from storms and tempests.

If one oversteps the bounds of moderation, the greatest pleasures cease to please.

First say to yourself what you would be; and then do what you have to do.

The world turns aside to let any man pass who knows where he is going.

Silence is safer than speech.

If thy brother wrongs thee, remember not so much his wrong-doing, but more than ever that he is thy brother.

Do not seek to bring things to pass in accordance with your wishes, but wish for them as they are, and you will find them.

Do not laugh much or often or unrestrainedly.

Difficulties show men what they are. In case of any difficulty remember that God has pitted you against a rough antagonist that you may be a conqueror, and this cannot be without toil.

Keep silence for the most part, and speak only when you must, and then briefly.

All philosophy lies in two words, sustain and abstain.

Be careful to leave your sons well instructed rather than rich, for the hopes of the instructed are better than the wealth of the ignorant.

You are a little soul carrying around a corpse.

No man is free who is not master of himself.

Not every difficult and dangerous thing is suitable for training, but only that which is conducive to success in achieving the object of our effort.

Is freedom anything else than the right to live as we wish? Nothing else.

Practice yourself, for heaven's sake in little things, and then proceed to greater.

Control thy passions lest they take vengence on thee.

If you wish to be a writer, write.

If you desire to be good, begin by believing that you are wicked.

The two powers which in my opinion constitute a wise man are those of bearing and forbearing.

We tell lies, yet it is easy to show that lying is immoral.

Whenever you are angry, be assured that it is not only a present evil, but that you have increased a habit.