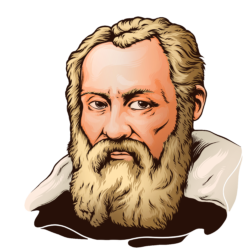 Galileo Galilei was a late sixteenth-century Italian polymath, astronomer and physicist, often referred to as the “father of observational astronomy”, “father of modern science “and “father of modern physics”. His contributions to science and astronomy include the invention of the thermoscope and various military compasses, the telescopic study of the phases of Venus, of the four largest satellites of Jupiter, and observation of Saturn’s rings as well as the analysis of sunspots, amongst others. His support of the theory of the Earth’s rotation around the sun was opposed by the Catholic Church, and he was placed under house arrest for the rest of his remaining life after he was tried and found guilty by the Inquisition.

It is surely harmful to souls to make it a heresy to believe what is proved.

Wine is sunlight, held together by water.

I have never met a man so ignorant that I couldn't learn something from him.

The sun, with all those planets revolving around it and dependent on it, can still ripen a bunch of grapes as if it had nothing else in the universe to do.

It seems to me that it was well said by Madama Serenissima, and insisted on by your reverence, that the Holy Scripture cannot err, and that the decrees therein contained are absolutely true and inviolable. But I should have in your place added that, though Scripture cannot err, its expounders and interpreters are liable to err in many ways; and one error in particular would be most grave and most frequent, if we always stopped short at the literal signification of the words.

With regard to matters requiring thought: the less people know and understand about them, the more positively they attempt to argue concerning them.

Passion is the genesis of genius.

See now the power of truth; the same experiment which at first glance seemed to show one thing, when more carefully examined, assures us of the contrary.

I think that in the discussion of natural problems we ought to begin not with the Scriptures, but with experiments and demonstrations.

The vain presumption of understanding everything can have no other basis than never having understood anything. For anyone who had ever experienced just once the perfect understanding of one single thing, and had truly tasted how knowledge is accomplished, would recognize that of the infinity of other truths he understands nothing.

Knowing thyself, that is the greatest wisdom.

You cannot teach a man anything, you can only help him find it within himself.

(T)he increase of known truths stimulates the investigation, establishment, and growth of the arts.

Surely, God could have caused birds to fly with their bones made of solid gold, with their veins full of quicksilver, with their flesh heavier than lead, and with their wings exceedingly small. He did not, and that ought to show something. It is only in order to shield your ignorance that you put the Lord at every turn to the refuge of a miracle.

I wish, my dear Kepler, that we could have a good laugh together at the extraordinary stupidity of the mob. What do you think of the foremost philosophers of this University? In spite of my oft-repeated efforts and invitations, they have refused, with the obstinacy of a glutted adder, to look at the planets or the Moon or my glass [telescope].

Long experience has taught me this about the status of mankind with regard to matters requiring thought: the less people know and understand about them, the more positively they attempt to argue concerning them, while on the other hand to know and understand a multitude of things renders men cautious in passing judgment upon anything new.

You can't teach anybody anything, only make them realize the answers are already inside them.

All truths are easy to understand once they are discovered; the point is to discover them.

The Bible shows the way to go to heaven, not the way the heavens go.

If you could see the earth illuminated when you were in a place as dark as night, it would look to you more splendid than the moon.

They seemed to forget that the increase of known truths stimulates the investigation, establishment and growth of the arts; not their dimination or destruction.

Mathematics is the key and door to the sciences.

You may force me to say what you wish; you may revile me for saying what I do. But it moves.