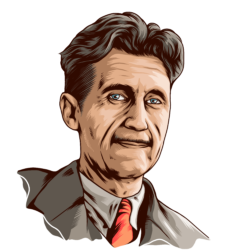 Eric Arthur Blair was an English novelist, essayist, journalist and critic, known by his pen name George Orwell. He was born to a British official father and a French mother. Orwell was brought up in poverty, but his intellectual capacity enabled him to win scholarships to two leading schools in England- Wellington and Eton. His writings were composed of lucid prose, social and political criticism, and an outspoken support for democracy.

If liberty means anything at all, it means the right to tell people what they do not want to hear.

In a time of deceit telling the truth is a revolutionary act.

We know that no one ever seizes power with the intention of relinquishing it.

He is a slave with a semblance of liberty which is worse than the most cruel slavery.

To see what is in front of one's nose needs a constant struggle.

The most effective way to destroy people is to deny and obliterate their own understanding of their history.

It is not possible for any thinking person to live in such a society as our own without wanting to change it.

If you can feel that staying human is worthwhile, even when it can t have any result whatever, you've beaten them

Being in a minority, even in a minority of one, did not make you mad. There was truth and there was untruth, and if you clung to the truth even against the whole world, you were not mad.

Perhaps one did not want to be loved so much as to be understood.

The existing social order is a swindle and its cherished beliefs mostly delusions.

Man is the only creature that consumes without producing

Like a drug, the machine is useful, dangerous and habit-forming. The oftener one surrenders to it the tighter its grip becomes.

There is something wrong with a regime that requires a pyramid of corpses every few years.

It appears to me that one defeats the fanatic precisely by not being a fanatic oneself, but on the contrary by using one's intelligence.

If you want to keep a secret, you must also hide it from yourself.

There was a belief in the revolution and the future, a feeling of having suddenly emerged into an era of equality and freedom.

Power is in tearing human minds to pieces and putting them together again in new shapes of your own choosing.

Double-think means the power of holding two contradictory beliefs in one's mind simultaneously, and accepting both of them.

People can foresee the future only when it coincides with their own wishes, and most grossly obvious facts can be ignored when they are unwelcome.

A people that elect corrupt politicians, imposters, thieves, and traitors are not victims, but accomplices.

In every one of those little stucco boxes, there s some poor bastard who' s never free except when he's fast asleep and dreaming