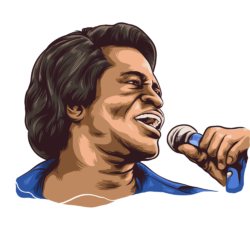 Known for his title Godfather of Soul, James Brown left the world jazz and rhythm-and-blues music that is worth to be heard until today. Brown grew up in a difficult situation, his mother left the family when he was four years old. As a product of a broken family, Brown’s younger years were mostly bad memories of crime, imprisonment, and hard labor. He overcame childhood difficulties by forming a gospel group Swanees where he sang and played the drums. The group has evolved a lot, changing names from the Swanees to Famous Flames to James Brown Revue. His journey to success was never easy, he was named several titles throughout his career, but he became known for being “The Hardest-Working Man in Show Business."

Our silence is deafening and deadly.

Takes a man or a woman to say I'm sorry, and it takes a fool to walk away.

Take those kids and raise them up, teach them how to drink out of a righteous cup.

Sometimes, you like to let the hair do the talking!

Sometimes you struggle so hard to feed your family one way, you forget to feed them the other way, with spiritual nourishment. Everybody needs that.

Sometimes I feel like I'm a preacher as well, 'cause I can really get into an audience.

Retire for what? What would I do? I made my name as a person that is helping. I'm like Moses in the music business.

Papa didn't cuss, he didn't raise a whole lot of fuss. But when we did wrong, Papa beat the hell out of us.

Tell the politicians and the hustlers: live and let live.

My music wasn't written by Mozart, Beethoven, Bach or Schubert. It's written by God and me. They go "a one and a two and up." We start on the downbeat. Bam! And that's where we got them.

My expectations of other people, I double them on myself.

Music, it requires more than brawn. It requires a lot of heart. You gotta put love in there.

Music has to breathe and sweat. You have to play it live.

Money won't change you, but time will take you out.

Michael Jackson has a very good heart. He was crying when he was giving me the award, 'cause his mind went back over the early days.

Like Christ said, love thee one another. I learned to do that, and I learned to respect and be appreciative and thankful for what I had.

You're like a dull knife, it just ain't cutting.

You only live once.

You got to use what you got to get just what you want.

You got to live for yourself, yourself and nobody else.

You can't teach others if you are living the same way.

You can take care of yourself, and God helps those who help themselves.