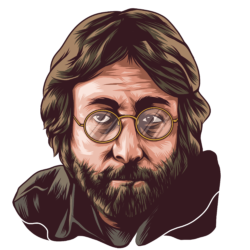 Musical genius and peace activist John Lennon was taken from us well before his time. Lennon was a member of the famous Liverpool band, The Beatles. A legendary singer-songwriter, Lennon touched many people's lives. The Beatles are known as one of the most influential bands of all time. He had released albums with his wife Yoko Ono after his career in The Beatles. John Lennon was unfortunately killed, making worldwide news at the time.

One thing I can tell you is you have to be free. Come together, right now, over me.

I put things down on sheets of paper and stuff them in my pockets. When I have enough, I have a book.

I am a violent man who has learned not to be violent and regrets his violence.

Art is only a way of expressing pain.

We all have Hitler in us, but we also have love and peace. So why not give peace a chance for once?

Everything is as important as everything else.

All music is rehash. There are only a few notes. Just variations on a theme. Try to tell the kids in the Seventies who were screaming to the Bee Gees that their music was just The Beatles redone. There is nothing wrong with the Bee Gees.

You either get tired fighting for peace, or you die.

Yeah we all shine on, like the moon, and the stars, and the sun.

When I cannot sing my heart, I can only speak my mind.

There are two basic motivating forces: fear and love. When we are afraid, we pull back from life. When we are in love, we open to all that life has to offer with passion, excitement, and acceptance. We need to learn to love ourselves first, in all our glory and our imperfections. If we cannot love ourselves, we cannot fully open to our ability to love others or our potential to create. Evolution and all hopes for a better world rest in the fearlessness and open-hearted vision of people who embrace life.

Love is a promise, love is a souvenir, once given never forgotten, never let it disappear.

All we are saying is give peace a chance.

If everyone could just be happy with themselves and the choices people around them make, the world would instantly be a better place!

We live in a world where we have to hide to make love, while violence is practiced in broad daylight.

Before Elvis there was nothing.

God is a concept by which we measure our pain.

Living is easy with eyes closed.

As usual, there is a great woman behind every idiot.