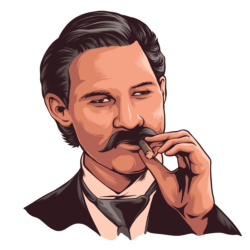 Kurt Vogel Russell was born in Springfield, Massachusetts, on March 17, 1951 and was raised in Thousand Oaks, California. Russell has followed the footsteps of his father in being an actor. By the age of 12, he already appeared in various films and television roles. The young Russell had appeared in an Elvis Presley film It Happened at the World's Fair. Russell proves his brilliance in acting by playing different roles in comedy, drama, action movie genre. He had worked with great directors like Quentin Tarantino, John Carpenter, and Garry Marshall. He had played plenty of blockbuster films like the Tombstone, Escape from New York, Big Trouble in Little China.

Society questions the police and their methods, and the police say, Do you want the criminals off the street or not?

If I see one side of somebody, I want to see the other side.

If it hadn't been for the videocassette, I may not have had a career at all.

If they're willing to pay you what you think you're worth for it, that's why an actor goes to work. A lot of times they want to pay you a lot for a picture you don't want to do.

If you have a vision or if you believe the director has a vision, then at least you've got something to talk about, something to try and head to and I think that's mandatory for every director to have to do a good job.

I'm a libertarian. I think a lot of people are libertarians and are afraid to admit it - or don't know.

I'm not a good collector.

It's not easy making money as an actor. It's just not an easy thing to do. There's so many that want to do it and so few opportunities to do it that it's not as easy as it would seem.

I've never looked at my career in terms of, What haven't I done that I want to do? I just generally find a story that I think is a good one and go to work.

The legs feed the wolf.

Ultimately your job as an actor is to perform however you're being asked to perform and there's many different procedures as an actor that you're going to run into that you should be prepared for and be ready to go to work and do the best you can and give the director the best thing you can to hopefully give him things on that day that could be shot preserved and out into a canned, then when they go into the editing room that's where a movie's made.

We all are capable of many different emotions and behaviors and thoughts and abilities and the way we sometimes respond to something is just very, it could be very, very different. You can one day feel this way, and the next day, feel that way.

We all do that thing which is the best in movies - we relate.

We are in a democratic society. It's our job to question.

When I was working on my career, I was very aware of what I had done, what I wanted to do next. I'm having a good time just reading things that might be interesting to do.

When you first are in front of the camera as a young person, you'd be surprised at all the insecurities you can get.

You can always tell somebody's sense of humor by if they like this movie or not.

You get burned a lot as an actor. You give somebody, you give some guy real free reign and he just doesn't know how to edit it properly. It just comes out messed up.

I hate giving away tricks, you have to create an impression and not an image. You want audiences to look at certain places and not look at other places. And when you've got the help of modern-day abilities with technology, it's a much more natural look.

Acting was something that just came along. But I made good money, so it wasn't something I was just going to put aside and pretend it didn't exist.