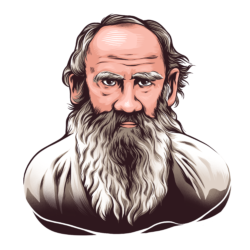 Count Lev Nikolayevich Tolstoy or known for the name Leo Tolstoy was born from a prominent aristocrat Russian family. His mother died before he reached the age of two, a few years after, his father followed her to death. Tolstoy exhibited talent in writing at an early age by composing touching-letters to his female cousin. He had kept a diary, which became his piece of self-analysis, and the experiences written on it helped him establish his fictional writing. Tolstoy’s brilliance gained popularity for having written one of the finest novels of all time, War and Peace (1865-69) and Anna Karenina (1875-77). Considered as the master of realistic fiction, Tolstoy wrote by exploring human experiences that made his works to be praised by the world, marking his name in the history of mankind.

There is something in the human spirit that will survive and prevail, there is a tiny and brilliant light burning in the heart of man that will not go out no matter how dark the world becomes.

Nothing is so necessary for a young man as the company of intelligent women.