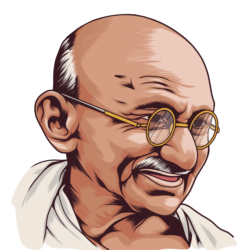 Mohandas Karamchand Gandhi was an Indian lawyer who led India’s independence battle against the British rule. He formed a non-violent civil disobedience by boycotting British institutions and used his brilliant mind to influence his people and the world. Gandhi also advocated for the civil rights of Indians in South Africa. Gandhi’s love for freedom and equality stirred him to form the Natal Indian Congress in 1894 to fight discrimination. His teachings and peaceful way of revolution inspired the next generation of leaders like Martin Luther King Jr. and Nelson Mandela. The world remembers him with his famous quote, “An eye for an eye only ends up making the whole world blind.”

An ounce of practice is worth a thousand words.

You must not lose faith in humanity. Humanity is like an ocean; if a few drops of the ocean are dirty, the ocean does not become dirty.

I object to violence because when it appears to do good, the good is only temporary; the evil it does is permanent.

You may never know what results come of your actions, but if you do nothing, there will be no results.

Strength does not come from physical capacity. It comes from an indomitable will.

To give pleasure to a single heart by a single act is better than a thousand heads bowing in prayer.

Permanent good can never be the outcome of untruth and violence.

Whenever you are confronted with an opponent, conquer him with love.

If I have the belief that I can do it, I shall surely acquire the capacity to do it even if I may not have it at the beginning.

If we are to teach real peace in this world, and if we are to carry on a real war against war, we shall have to begin with the children.

Service which is rendered without joy helps neither the servant nor the served.

Freedom is not worth having if it does not include the freedom to make mistakes.

The best way to find yourself is to lose yourself in the service of others.

A coward is incapable of exhibiting love; it is the prerogative of the brave.

An eye for eye only ends up making the whole world blind.

Nobody can hurt me without my permission.

I will not let anyone walk through my mind with their dirty feet.

A man is but a product of his thoughts. What he thinks he becomes.

If we could change ourselves, the tendencies in the world would also change. As a man changes his own nature, so does the attitude of the world change towards him. We need not wait to see what others do.

Hate the sin, love the sinner.

The weak can never forgive. Forgiveness is the attribute of the strong.