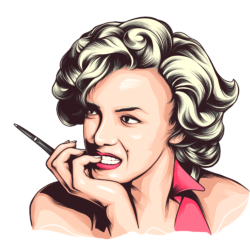 Who would not know this legendary name that lives forever in film history? Marilyn Monroe’s childhood was spent in foster care and in an orphanage. She overcame her childhood plight and became one of the world’s biggest sex symbols of all time. Monroe’s way to stardom started when she was discovered by a photographer and begun her career as a model. Later, she signed her first movie contract that came with a new name and new personality, from there the icon Marilyn Monroe was born. Her popularity made her films a big success with gross of more than 200 million dollars. The Asphalt Jungle, was her first movie to earn her a lot of attention, some films that followed like All About Ever, Niagara, How to Marry Millionaire were also a huge success that added up more credit to her talent.

Millions of people live their entire lives without finding themselves. But it is something I must do.

Who said nights were for sleep?

Dreaming about being an actress, is more exciting than being one.

I read poetry to save time.

Always remember to smile and look up at what you got in life.

Looking back, I guess I used to play-act all the time. For one thing, it meant I could live in a more interesting world than the one around me.

Men are always ready to respect anything that bores them.

I am not a victim of emotional conflicts. I am human.

How wrong it is for a woman to expect the man to build the world she wants, rather than to create it herself.

For those who are poor in happiness, each time is a first time; happiness never becomes a habit.

Most men judge your importance in their lives by how much you can hurt them.

Beneath the makeup and behind the smile I am just a girl who wishes for the world.

You never know what life is like, until you have lived it.

This is a free and democratic country and no one has a monopoly on anything.

For life: it is rather a determination not to be overwhelmed. For work: the truth can only be recalled, never invented.

It takes a smart brunette to play a dumb blonde.

I always felt insecure and in the way, but most of all I felt scared. I guess I wanted love more than anything else in the world.

Give a girl the right pair of shoes and she'll conquer the world.

Fear is stupid. So are regrets.

I restore myself when I'm alone.