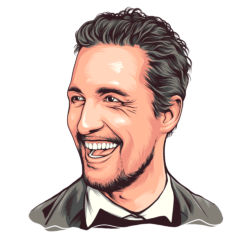 This Academy award-winning actor got his first big break in 1993 with the film Dazed and Confused. He later played major roles in the movies: A Time to Kill (1996) and Amistad (1997. In 2014, Matthew worked with the famous director Christopher Nolan with the film Interstellar where he played the lead role together with Anne Hathaway. Before he earned the Sexiest Man Alive title in 2005, Matthew already celebrated his physical charm in High School when he was voted as the “Most Handsome Student”.

I'm not arrogant enough to look back on my career and criticize my choices. It's really not my place.

A creep is someone who claims he's one thing but he's actually another.

Music is a really great creative tool for me, for different roles.

We have a big appetite for putting people down but, at the heart of everyone, there's enough room for all of us to succeed.

Absolutely not. I have no problem with commitment. In fact, I love having someone in my life.

What the heck is true love? I remember feeling, back when I was 12 and 'going' with this girl, 'Is this true love?'

When someone bestows something on you, no matter how true it is, when someone says, 'Sexiest Man Alive,' I'm honestly going, 'Thank you. Right on.' For me, it's never canceled out anything, it's never made me go, 'Does this make me less talented of an actor?'

My wife and I don't compete. We know each other's preferences, and we work to provide those for each other. One will take over when the other is faced with something he or she dislikes. That's what friends do.

I talk to myself all the time. Just make sure you answer.

I love good film, whether it's an independent or studio film. The independent films, I think the good ones aren't necessarily eccentric ones but they're the more specific ones.

I've never been a jealous person, and I've never felt built up by someone else's failure - that's a cheap thrill.

I was raised on, 'You go get a nine-to-five job, earn your pay and work your way up.'

There are certain nights you and your image just aren't in the same bed.

Kids will remind you that, even though you've gone down a road 100 times, it's brand new for them - and that's healthy.

For me, one of the toughest things about Valentine's Day is that it gets geared up as the day to profess your love. See, T-E-S-T - that's a bad word that doesn't go with L-O-V-E.

My rule is to break one sweat a day.

When you have good friends you've been around, every time they talk, you don't give them your full attention. You don't look them in the eye and stop. Half the time, you're listening, half the time, you are ignoring them.

I'm a football fan, a sports fan, a fan of competition.

My life is the road, man. I need to keep moving.

Now, you lose something in your life, or you come into a conflict, and there's gonna come a time that you're gonna know: There was a reason for that. And at the end of your life, all the things you thought were periods, they turn out to be commas. There was never a full stop in any of it.