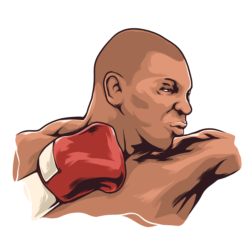 Known for his title as the “Iron Mike” and “Kid Dynamite”, Mike Tyson is considered to be one of the best heavyweight boxers of all time. At the age of 20, he became the youngest heavyweight boxing champion of the world. Tyson had thrown up his gift and talent in boxing and lost his title in 1990. got incarcerated for rape charges. His notoriety was known publicly when he bit Evander Holyfield’s ear during their boxing rematch in 1997. Later, he got his new nickname as the ‘Baddest Man on the Planet”.

Discipline is doing what you hate to do but doing it like you love it.

The ability to apply the discipline, the ability to do what needs to be done no matter how he feels inside, in my opinion, is the definition of a true professional.

I don't understand why people would want to get rid of pigeons. They don't bother no one.

I've lived in places these guys can't defecate in.

Real freedom is having nothing. I was freer when I didn't have a cent.

Quayle said the worst thing that happened to him was that he never trusted his own judgment. I said from now on I am going to go with my own judgment.

People are going to say what they say. I know sometimes I say things; I offend people.

One day some guy is going to get a billion-dollar fight.

My biggest weakness is my sensitivity. I am too sensitive a person.

Mr. Arthur Ashe, he was good. I read some of his books. He knew about everything, but he was real quiet and didn't talk much. I never met him.

That equals to being a fool, having fame and no fortune. A lot of guys out there have fame doing this and doing that, but they are broke.

I'm not much for talking. You know what I do. I put guys in body bags when I'm right.

I'm not Mother Teresa, but I'm not Charles Manson, either.

I'm just like you. I enjoy the forbidden fruits in life, too.

I'm in trouble because I'm normal and slightly arrogant. A lot of people don't like themselves and I happen to be totally in love with myself.

Some people try to get you out of slavery for you to be their slave.

Sometimes I put on a ski mask and dress in old clothes, go out on the streets and beg for quarters.

I'm a Muslim, but I think Jesus would have a drink with me. He would be cool. He would talk to me.

That's what people respect, the fact that I wasn't a chump that laid on his back and gave up.

The drug dealers, they sympathize with me. They see me as some sort of pathetic character.

The only thing I do is just pray for inspiration, for a way of thinking, because I don't have any particular goal in sight.