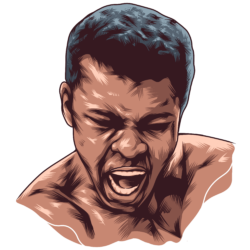 Muhammad Ali was an American boxer, philanthropist, activist and was known as one of the greatest athletes of all time. He was a heavyweight boxing champion who had an impressive 56-win record. Ali, had already shown his interest in boxing at the age of 12. He wasn’t afraid to take punches, inside or outside the boxing arena. It all started when his bike was stolen and sworn to beat up the thief. He learned to box by the help of a policeman to whom he reported his stolen bicycle.

I am the greatest, I said that even before I knew I was.

The man who has no imagination has no wings.

If they can make penicillin out of moldy bread, they can sure make something out of you.

If my mind can conceive it, if my heart can believe it--then I can achieve it.

It's not bragging if you can back it up.

I'm not the greatest; I'm the double greatest. Not only do I knock 'em out, I pick the round.

Hating people because of their colour is wrong. And it doesn't matter which colour does the hating. It's just plain wrong.

I wish people would love everybody else the way they love me. It would be a better world.

I never thought of losing, but now that it' s happened, the only thing is to do it right. That's my obligation to all the people who believe in me. We all have to take defeats in life.

My only fault is that I don't realize how great I really am.

There are no pleasures in a fight but some of my fights have been a pleasure to win.

It's lack of faith that makes people afraid of meeting challenges, and I believed in myself.

It's the repetition of affirmations that leads to belief. And once that belief becomes a deep conviction, things begin to happen.

My principles are more important than the money or my title.

I done wrestled with an alligator, I done tussled with a whale; handcuffed lightning, thrown thunder in jail; only last week, I murdered a rock, injured a stone, hospitalised a brick; I'm so mean I make medicine sick.

Service to others is the rent you pay for your room here on earth.

It isn't the mountains ahead to climb that wear you out; it's the pebble in your shoe.

I wanted to use my fame and this face that everyone knows so well to help uplift and inspire people around the world.

I am an ordinary man who worked hard to develop the talent I was given. I believed in myself, and I believe in the goodness of others.

Age is whatever you think it is. You are as old as you think you are.