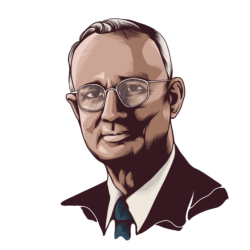 Napoleon Hill was a known American author who wrote one of the greatest self-improvement books of all time. He authored the book “Think and Grow Rich!” from where he earned enormous success as a writer and made him known in the field of personal-success literature. He also developed the master mind concept and other principles of success, from there he coined the phrase, “Master Mind”. For that work, he was awarded an  honorary Doctor of Literature degree by the Pacific International University.

Any idea, plan, or purpose may be placed in the mind through repetition of thought.

Every adversity, ever failure, every heartache carries with it the seed of an equal or greater benefit.

Victory is always possible for the person who refuses to stop fighting.

Tell me how you use your spare time, and how you spend your money, and I will tell you where and what you will be in ten years from now.

To be a star, you must shine your own light, follow your own path, and don't worry about darkness, for that is when the stars shine brightest.

Some people dream of success, while others wake up and work hard at it.

Success comes to those who become success conscious.

When your desires are strong enough, you will appear to possess superhuman powers to achieve.

Great achievement is usually born of great sacrifice, and never the result of selfishness.

It takes half your life before you discover life is a do-it-yourself project.

A positive mind finds a way it can be done; A negative mind looks for all the ways it can't be done.

The way of success is the way of continuous pursuit of knowledge.

Deliberately seek the company of people who influence you to think and act on building the life you desire.

You are the master of your destiny. You can influence, direct and control your own environment. You can make your life what you want it to be.

You give before you get.

The ladder of success is never crowded at the top.

Life reflects your own thoughts back to you.

Action is the real measure of intelligence.

You become what you think about.

Lions don't have to roar. There is power in silence, confidence, and persistence. Those who work don't talk, and those who talk don't work. Handle your business. Measure your efforts by results. Focus your time, energy, and activity on mastering and executing a plan.

Patience, persistence and perspiration make an unbeatable combination for success.

Procrastination is the bad habit of putting off until the day after tomorrow what should have been done the day before yesterday.