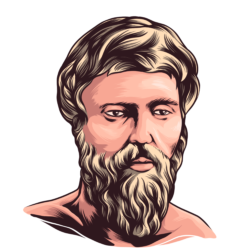 Came from a wealthy family in Athens, son of Aristobulus, Plutarch made his name in the history of mankind for his exceptional works as a biographer and philosopher. He gained his philosophical knowledge from his teacher Ammonius. Plutarch’s scholarly works were influenced by the evolution of the essay, and historical writing in the European world. He had made several studies and writings, and the two of his most notable works were the “Parallel Lives” and “Moralia”.

Moral habits, induced by public practices, are far quicker in making their way into men's private lives, than the failings and faults of individuals are in infecting the city at large.

Silence at the proper season is wisdom, and better than any speech.

Courage stands halfway between cowardice and rashness, one of which is a lack, the other an excess of courage.

Those who aim at great deeds must also suffer greatly.

To make no mistakes is not in the power of man; but from their errors and mistakes the wise and good learn wisdom for the future.

The measure of a man is the way he bears up under misfortune.

An imbalance between rich and poor is the oldest and most fatal ailment of all republics.

Fate leads him who follows it, and drags him who resist.

The whole life is but a point of time; let us enjoy it, therefore, while it lasts, and not spend it to no purpose.

Nor is it always in the most distinguished achievements that men's virtues or vices may be best discovered; but very often an action of small note, a short saying, or a jest, shall distinguish a person's real character more than the greatest sieges.

Perseverance is more prevailing than violence; and many things which cannot be overcome when they are together, yield themselves up when taken little by little.

Good birth is a fine thing, but the merit is our ancestors.

Let us carefully observe those good qualities wherein our enemies excel us; and endeavor to excel them, by avoiding what is faulty, and imitating what is excellent in them.

Painting is silent poetry, and poetry is painting that speaks.

Neither blame or praise yourself.

Learn to be pleased with everything; with wealth, so far as it makes us beneficial to others; with poverty, for not having much to care for; and with obscurity, for being unenvied.

To do an evil act is base. To do a good one without incurring danger, is common enough. But it is part of a good man to do great and noble deeds though he risks everything in doing them.

No man ever wetted clay and then left it, as if there would be bricks by chance and fortune.

I don't need a friend who changes when I change and who nods when I nod; my shadow does that much better.

We ought not to treat living creatures like shoes or household belongings, which when worn with use we throw away.

Not by lamentations and mournful chants ought we to celebrate the funeral of a good man, but by hymns, for in ceasing to be numbered with mortals he enters upon the heritage of a diviner life.

What we achieve inwardly will change outer reality.

The real destroyer of the liberties of the people is he who spreads among them bounties, donations and benefits.