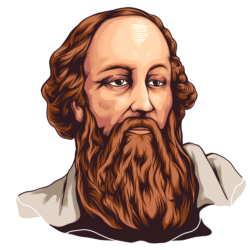 Famously known as the Pythagoras of Samos, an ancient Ionian Greek philosopher, and a great mathematician. He discovered a systematical way to solve Mathematical problems. He was often attributed to the discovery of the Pythagora’s Theorem or the Pythagorean Theorem, a mathematical formula which is widely-used in academics today. His genius earned him the title -The First “true” Mathematician.

Man know thyself; then thou shalt know universe and God.

Love that shines from within cannot be darkened by obstacles of the world of consequences.

Allow not sleep to close your eyes before three times reflecting on your actions of the day. What deeds done well, what not, what left undone?

There is nothing so easy but that it becomes difficult when you do it reluctantly.

Be silent or let thy words be worth more than silence.

There is no word or action but has its echo in eternity.

Choose rather to be strong of soul than strong of body.

Rest satisfied with doing well, and leave others to talk of you as they please.

Anger begins with folly, and ends with repentance.

Above all things, reverence yourself.

Above all things, respect yourself.

Friends are as companions on a journey, who ought to aid each other to persevere on the road to a happier life.

Silence is better than unmeaning words.

The art of living happily is to live in the present.

If you have a wounded heart, touch it as little as you would an injured eye. There are only two remedies for the suffering of the soul: hope and patience.

It is better wither to be silent, or to say things of more value than silence. Sooner throw a pearl at hazard than an idle or useless word; and do not say a little in many words, but a great deal in a few.

Strength of mind rests in sobriety for this keeps your reason unclouded by passion.

A thought is an idea in transit.

Do not say a little in many words but a great deal in a few.

Reason is immortal, all else mortal.

The experience of life in a finite, limited body is specifically for the purpose of discovering and manifesting supernatural existence.

Choices are the hinges of destiny.

There is geometry in the humming of the strings, there is music in the spacing of the spheres.