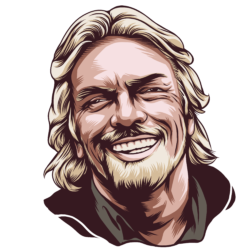 A high school dropout who made his fortune at the age of 16 when he founded a youth-culture magazine called “Student”. To fund his magazine, Branson had the idea to start a mail-order record company named Virgin, (now known as a famous multinational conglomerate company with multiple locations worldwide). The young entrepreneur then saw the success of his business so he decided to build a recording studio in Oxfordshire, England in 1972. With his successful ventures, Branson got his name in the line-up of business tycoons who overcame childhood struggles and may have thought that quitting school is not that bad after all.

Chance favors the prepared mind. The more you practice, luckier you become.

I was dyslexic, I had no understanding of schoolwork whatsoever. I certainly would have failed IQ tests. And it was one of the reasons I left school when I was 15 years old. And if I - if I'm not interested in something, I don't grasp it.

My favorite mode of transport is hot-air ballooning. It's so graceful to be blown by the wind, to go where the wind takes you.

There's an inherent danger in letting people think that they have perfected something. When they believe they've 'nailed it,' most people tend to sit back and rest on their laurels while countless others will be labouring furiously to better their work!

For a successful entrepreneur it can mean extreme wealth. But with extreme wealth comes extreme responsibility. And the responsibility for me is to invest in creating new businesses, create jobs, employ people, and to put money aside to tackle issues where we can make a difference.

Regretting not doing something is worse than regretting doing something. It means I can sleep with a clear conscience. We all have to fight for our values and protect the things that matter to us, but also appreciate the joys life brings.

We, we - as I say, we go in and shake up other industries and I think, you know, we do it differently and I think that industries are not quite the same as a result of Virgin attacking the market.

As more airlines consolidated and grew larger and more focused on the bottom line, flying in the U.S. became an awful experience. Despite moves to block our airline from flying, Virgin America began service in August 2007 - with the goal of making flying good again.

I cannot remember a moment in my life when I have not felt the love of my family. We were a family that would have killed for each other - and we still are.

Lightning is something which, again, we would rather avoid.

The brave may not live forever, but the cautious do not live at all.

When I was a kid, I had a tendency to criticize. But when I did, my mum would whisk me off to the bathroom to stand in front of a mirror. Ten minutes, never less. To think about how criticism is a poor reflection on the one who criticizes.

My general attitude to life is to enjoy every minute of every day. I never do anything with a feeling of, 'Oh God, I've got to do this today.'

A business has to be involving, it has to be fun, and it has to exercise your creative instincts.

Fortunately we're not a public company - we're a private group of companies, and I can do what I want.

In business, if you realize you've made a bad decision, you change it.

Respect is how to treat everyone, not just those you want to impress.

Well, I think that there's a very thin dividing line between success and failure. And I think if you start a business without financial backing, you're likely to go the wrong side of that dividing line.

As much as you need a strong personality to build a business from scratch, you also must understand the art of delegation. I have to be good at helping people run the individual businesses, and I have to be willing to step back. The company must be set up so it can continue without me.

I don't think so, in that Virgin is already a global brand. Brands like Amazon have had to spend hundreds of millions of pounds you know, building their brands, whereas Virgin is already well-known around the world.

Like getting into a bleeding competition with a blood bank.