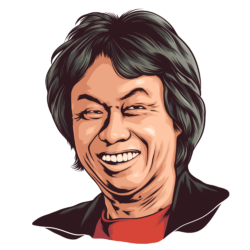 Our childhood days were made awesome, thanks to this guy who developed the arcade games like Donkey Kong and Super Mario Bros. He is Shigeru Miyamoto, a world-famous Japanese video game designer who pioneered in the development of video games and is often regarded as the "Father of Modern Video Gaming". As the first artist of Nintendo, Miyamoto was there in the development of earlier arcade games in 1979. His successful works in the video game industry made him the first video game designer to be inducted into the Hall of Fame of the ‘Academy of Interactive Arts and Science. The Super Mario Bros. as well was named as the "greatest game of all time" in an IGN poll conducted in 2005.

I think that inside every adult is the heart of a child. We just gradually convince ourselves that we have to act more like adults.

A delayed game is eventually good, but a rushed game is forever bad.

When I create a game, I try to focus more on the emotions that the player experiences during the game play.

A late game is only late until it ships. A bad game is bad until the end of time.

I made some games, but I'm pretending like I didn't because they all turned out weird.

There's definitely space for uniqueness in a home console.

I'd like to be known as the person who saw things from a different point of view to others.

What if everything you see is more than what you see--the person next to you is a warrior and the space that appears empty is a secret door to another world? What if something appears that shouldn't? You either dismiss it, or you accept that there is much more to the world than you think. Perhaps it is really a doorway, and if you choose to go inside, you'll find many unexpected things.

Game music has a purpose and it does incorporate sound effects.

Of course, when it comes to Japanese role-playing games, in any role-playing game in Japan you're supposed to collect a huge number of items, and magic, and you've got to actually combine different items together to make something really different.

I never really participated in specific sports or anything, but once I hit 40, I started to get a little bit more active and began swimming more.

This is the entertainment industry, so game designers have to have a creative mind and also have to be able to stand up against the marketing people at their company - otherwise they cannot be creative. There are not that many people who fit that description.

I'm not saying that I'm going to retire from game development altogether.

Games are a trigger for adults to again become primitive, primal, as a way of thinking and remembering. An adult is a child who has more ethics and morals, that's all. I am not creating a game. I am in the game. The game is not for children, it is for me. It is for an adult who still has a character of a child.

Our job as the game creators or developers - the programmers, artists, and whatnot - is that we have to kind of put ourselves in the user's shoes. We try to see what they're seeing, and then make it, and support what we think they might think.

I think everyone can enjoy games.

To create a new standard, you have to be up for that challenge and really enjoy it.

I'm very impressed that there are so many fans - not just in Japan, but here in America - that are fond of the work that I've done. I'm actually kind of embarrassed by it all.

When I'm making video games today, I want people to be entertained. I am always thinking, How are people going to enjoy playing the games we are making today? And as long as I can enjoy something other people can enjoy it, too.

Games have grown and developed from this limited in-the-box experience to something that's everywhere now. Interactive content is all around us, networked, ready. This is something I've been hoping for throughout my career.

I think I can make an entirely new game experience, and if I can't do it, some other game designer will.

Today, there are many, many ways to entertain people in one single videogame. And the Internet has made it so easy for people to ask for clues.

Actually, 3D is really the most normal thing because it's how those of us with two eyes usually see the world. TVs are the unusual things in 2D!

It isn't about games, for me, personally, and it never really was. It was about creating something- anything- far bigger than yourself.