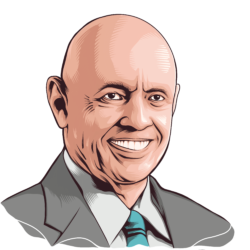 Among the few authors who had managed to maintain a name in the best-seller list for several years, build a multi-million dollar business empire, Stephen Covey is one of them. Hailed as the most successful “management guru”, Covey influenced the world with his notable achievements and motivational speeches. He was lauded for his work “The Seven Habits of Highly Effective People”, a book published in 1989 that gained international applause, sold with more than 25 million copies, translated into 38 languages. With his great works, Covey was recognized by Time Magazine as one of the 25 Most Influential Americans in 1996.

Seek to understand rather than be understood.

Trust is the highest form of human motivation. It brings out the very best in people. But it takes time and patience.

Motivation is a fire from within. If someone else tries to light that fire under you, chances are it will burn very briefly.

There are three constants in life... change, choice and principles.

If you can hire people whose passion intersects with the job, they won't require any supervision at all. They will manage themselves better than anyone could ever manage them. Their fire comes from within, not from without. Their motivation is internal, not external.

What you do has far greater impact than what you say.

Live your life by a compass, not a clock.

We judge ourselves by our intentions. And others by their actions.

See every problem as an opportunity to exercise creative energy.

Live out of your imagination, not your history.

It takes humility to seek feedback. It takes wisdom to understand it, analyze it and appropriately act on it.

Want to improve your relationships? See love as a verb rather than as a feeling.

Begin with the end in mind.

Doing more things faster is no substitute for doing the right things.

We immediately become more effective when we decide to change ourselves rather than asking things to change for us.

Too many vacations that last too long, too many movies, too much TV, too much video game playing - too much undisciplined leisure time in which a person continually takes the course of least resistance gradually wastes a life. It ensures that a person's capacities stay dormant, that talents remain undeveloped, that the mind and spirit become lethargic and that the heart remains unfulfilled.

You can retire from a job, but don't ever retire from making extremely meaningful contributions in life.

Prepare your mind and heart before you prepare your speech . What we say may be less important than how we say it.

I am personally convinced that one person can be a change catalyst, a 'transformer' in any situation, any organization. Such an individual is yeast that can leaven an entire loaf. It requires vision, initiative, patience, respect, persistence, courage, and faith to be a transforming leader.

We see the world, not as it is, but as we are??or, as we are conditioned to see it.

If two people have the same opinion, one is unnecessary. ... I don't want to talk, to communicate, with someone who agrees with me; I want to communicate with you because you see it differently. I value that difference.