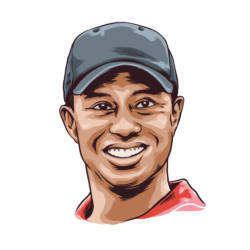 The world of golf would always remember this man who made an incredible performance in 1997 when he became the first African American to win the US Masters in Augusta at the age of 21. In his earlier years, Tiger Woods learned to play golf from his father who served as his teacher and mentor. Among other golfers, Woods may have been the youngest to learn golf as he was only eight years old when he mastered the game. His exceptional skill in golf made him won 13 majors and earned him the PGA Player of the Year title 10 times.

A lot has transpired in my life.

A lot of times I blend in a little bit easier because I'm not like a basketball player who's going to stand out because of his height.

Achievements on the golf course are not what matters, decency and honesty are what matter.

All I can say is that I'm getting married in the future. I've narrowed it down to that.

All I know is I've tried my best.

All that really matters is I have two beautiful kids, and I'm trying to be the best dad I can possibly be, and that's the most important thing of all.

And I don't cook, either. Not as long as they still deliver pizza.

As a child, the family that I had and the love I had from my two parents allowed me to go ahead and be more aggressive, to search and to take risks knowing that, if I failed, I could always come home to a family of love and support.

As a kid when I was growing up, as any kid, you think you know every thing and I was no different to that.

As a kid, I might have been psycho, I guess, but I used to throw golf balls in the trees and try and somehow make par from them. I thought that was fun.

Don't force your kids into sports. I never was. To this day, my dad has never asked me to go play golf. I ask him. It's the child's desire to play that matters, not the parent's desire to have the child play. Fun. Keep it fun.

Education is a priority over any sport because without a mind you can't contribute to society.

Every sport evolves. Every sport gets bigger and more athletic, and you have to keep up.

Everyone knows what the Masters is, even if you're a non-golfer. People know what Wimbledon is. They know what the Super Bowl is. There are certain events that people just know about.

Everyone wants to get a piece of me.

Golf has made me and shaped me into the person I am here today.

Golf is a great way for someone to learn discipline, responsibility and sportsmanship.

Golf is evolving, every day, every shot.

Golf is something I do selfishly for myself.

Green and black go well together, don't they?