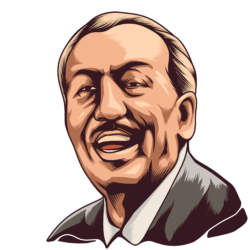 He pioneered in the American cartoon industry, a motion picture and television producer who founded Disneyland and Disney World. Our childhood memories were made awesome by Walt Disney’s creation of the famous cartoon character Mickey Mouse, and the introduction of fairy tale movies like Cinderella, Sleeping Beauty, and Snow White. Disney held 22 Academy Awards and the holder of the most awards ever recorded in history.

The difference between winning and losing is most often not quitting.

People often ask me if I know the secret of success and if I could tell others how to make their dreams come true. My answer is, you do it by working.

Laughter is timeless, imagination has no age, dreams are forever.

The way to get started is to quit talking and begin doing.

I am in no sense of the word a great artist, not even a great animator; I have always had men working for me whose skills were greater than my own. I am an idea man.

Every child is born blessed with a vivid imagination. But just as a muscle grows flabby with disuse, so the bright imagination of a child pales in later years if he ceases to exercise it.

A person should set his goals as early as he can and devote all his energy and talent to getting there. With enough effort, he may achieve it. Or he may find something that is even more rewarding. But in the end, no matter what the outcome, he will know he has been alive.

Animation can explain whatever the mind of man can conceive. This facility makes it the most versatile and explicit means of communication yet devised for quick mass appreciation.

We believed in our idea - a family park where parents and children could have fun- together.

I wanted to retain my individuality. I was afraid of being hampered by studio policies. I knew if someone else got control, I would be restrained.

In our animation we must show only the actions and reactions of a character, but we must picture also with the action. . . the feeling of those characters.

I started, actually, to make my first animated cartoon in 1920. Of course, they were very crude things then and I used sort of little puppet things.

The era we are living in today is a dream of coming true.

My greatest reward is that I have been able to build this wonderful organization.

I have no use for people who throw their weight around as celebrities, or for those who fawn over you just because you are famous.

Of all of our inventions for mass communication, pictures still speak the most universally understood language.

I believe in being an innovator.

A man should never neglect his family for business.

I would rather entertain and hope that people learned something than educate people and hope they were entertained.

Everyone falls down. Getting back up is how you learn how to walk.

In bad times and in good, I have never lose my sense of zest for life.

Mickey Mouse popped out of my mind onto a drawing pad 20 years ago on a train ride from Manhattan to Hollywood at a time when business fortunes of my brother Roy and myself were at lowest ebb and disaster seemed right around the corner.