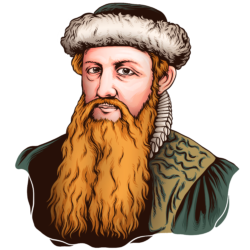 Johannes Gutenberg was a German inventor, publisher and printer, who introduced the mechanical movable type printing press in Europe in 1439, which started the Printing Revolution, bringing in the modern period in human history. Though he was not the first one to use it in the world, he is, however, the first European to ever do so, and he also helped create a practical system that allowed mass production of printed books, making it economically viable for both printers and readers. His invention is widely regarded as the most important of the second millennium.

Give me twenty-six soldiers of lead and I will conquer the world.

God suffers in the multitude of souls whom His word can not reach.

It is a press, certainly, but a press from which shall flow in inexhaustible streams. Through it, God will spread His Word. A spring of truth shall flow from it: like a new star it shall scatter the darkness of ignorance, and cause a light heretofore unknown to shine amongst men.

Let us break the seal which seals up holy things and give wings to Truth in order that she may win every soul that comes into the world by her word no longer written at great expense by hands easily palsied, but multiplied like the wind by an untiring machine.

Religious truth is imprisoned in a small number of manuscript books, which confine instead of spread the public treasure.