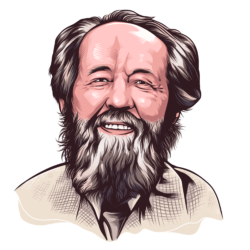 This Russian literary giant raised the arms of the Soviet Union when he chose to go against the Stalin regime and criticized the dictator’s governance. He revealed the history of the penal colony camps “Gulag” which housed the oppression, forced labor, and inhumane treatment to prisoners. He was celebrated as a symbol of the anti-communist resistance.

I have grown used to the fact that public repentance is the most unacceptable option for the modern politician.

In keeping silent about evil, in burying it so deep within us that no sign of it appears on the surface, we are implanting it, and it will rise up a thousandfold in the future. When we neither punish nor reproach evildoers . . . we are ripping the foundations of justice from beneath new generations.

It's an universal law-- intolerance is the first sign of an inadequate education. An ill-educated person behaves with arrogant impatience, whereas truly profound education breeds humility.

A fish does not campaign against fisheries-it only tries to slip through the mesh.

A forest doesn't weep over one tree.

A great disaster had befallen Russia: Men have forgotten God; that's why all this has happened.

A man is happy so long as he chooses to be happy and nothing can stop him.

A man used to riding in a car cannot understand a pedestrian.

A state of war only serves as an excuse for domestic tyranny.

Any man who has once proclaimed violence as his method is inevitably forced to take the lie as his principle.

Anyone who has proclaimed violence his method inexorably must choose lying as his principle.

Anything too far out of tune with our attitude is lost, either in the ears themselves or somewhere beyond, but it is lost.

At what point, then, should one resist? When one's belt is taken away? When one is ordered to face into a corner? When one crosses the threshold of one's home? An arrest consists of a series of incidental irrelevancies, of a multitude of things that do not matter, and there seems no point in arguing about one of them individually...and yet all these incidental irrelevancies taken together implacably constitute the arrest.

Bless you, prison, for having been in my life!

Blow the dust off the clock. Your watches are behind the times. Throw open the heavy curtains which are so dear to you - you do not even suspect that the day has already dawned outside.

Direct [people] towards mutual affection. A beast gnawing at its prey can be happy too, but only human beings can feel affection for each other, and this is the highest achievement they can aspire to.

Do not pursue what is illusory - property and position: all that is gained at the expense of your nerves decade after decade and can be confiscated in one fell night. Live with a steady superiority over life - don't be afraid of misfortune, and do not yearn after happiness; it is after all, all the same: the bitter doesn't last forever, and the sweet never fills the cup to overflowing.

Every human act can be disguised with a coating of gilt.

Every man always has handy a dozen glib little reasons why he is right not to sacrifice himself.

Everything you add to the truth subtracts from the truth.

First would be the literary side, then the spiritual and philosophical. The political side is required principally because of the necessity of the current Russian position.