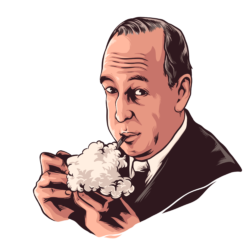 Lewis Clive Staples Lewis was born in Belfast Ireland and came from a family of bookish Protestants. This Irish writer held an academic role at the University of Oxford and Cambridge University. If you love the fantasy movie Narnia then you probably know this man behind it. Lewis gained his popularity when the fantasy series book The Chronicles of Narnia made a big hit when adapted into film and was shown on various screens worldwide.

Failures, repeated failures, are finger posts on the road to achievement. One fails forward toward success.

You are never too old to set another goal or to dream a new dream.

You can tell a workingman you like him, but he knows whether you are sincere or not. You can't make him believe you are interested in his welfare unless you are.

Love is something more stern and splendid than mere kindness.

It is a good rule after reading a new book, never to allow yourself another new one till you have read an old one in between.

You never know how much you really believe anything until its truth or falsehood becomes a matter of life and death to you.

One road leads home and a thousand roads lead into the wilderness.

Suspicion often creates what it suspects.

It is when we notice the dirt that God is most present in us; it is the very sign of His presence.

The Christian does not think God will love us because we are good, but that God will make us good because He loves us.

There is no uncreated being except God. God has no opposite.

Courage is not simply one of the virtues, but the form of every virtue at the testing point.

The task of the modern educator is not to cut down jungles, but to irrigate deserts.

Free will, though it makes evil possible, is also the only thing that makes possible any love or goodness or joy worth having.

With the possible exception of the equator, everything begins somewhere.

There is but one good; that is God. Everything else is good when it looks to Him and bad when it turns from Him.

There are far, far better things ahead than any we leave behind.

If we find ourselves with a desire that nothing in this world can satisfy, the most probable explanation is that we were made for another world.

Everyone says forgiveness is a lovely idea, until they have something to forgive.

What draws people to be friends is that they see the same truth. They share it.

To walk out of His will is to walk into nowhere.

Experience: that most brutal of teachers. But you learn, my God do you learn.

I think that if God forgives us we must forgive ourselves. Otherwise, it is almost like setting up ourselves as a higher tribunal than Him.