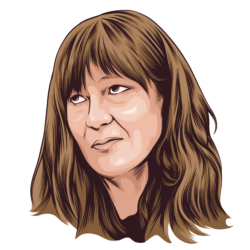 Among other fiction book authors, J.K. Rowling is one of the few who is much-love and admired by the people. She is destined to grow up with a pen in hand and the world’s attention for writing the most popular and critically-acclaimed Harry Potter series. Rowling has received enormous awards and honors such as France’s Légion d’Honneur, and the Hans Christian Andersen Award. Her book Harry Potter is now available in 80 languages, with over 500 million copies sold worldwide.

Failure meant a stripping away of the inessential. I stopped pretending to myself that I was anything other than what I was, and began to direct all my energy into finishing the only work that mattered to me. Had I really succeeded at anything else, I might never have found the determination to succeed in the one arena I believed I truly belonged.

Poverty entails fear and stress and sometimes depression. It meets a thousand petty humiliations and hardships. Climbing out of poverty by your own efforts that is something on which to pride yourself but poverty itself is romanticized by fools.

Whatever money you might have, self-worth really lies in finding out what you do best.

You lose your individuality a huge amount when you have no money, and I certainly had that experience.

It does not do well to dwell on dreams and forget to live.

To the well-organized mind, death is but the next great adventure.

Dark and difficult times lie ahead. Soon we must all face the choice between what is right and what is easy.

And the idea of just wandering off to a cafe with a notebook and writing and seeing where that takes me for awhile is just bliss.

Are you the sort of person who gloats when they see a woman fall, or the kind that celebrates a magnificent recovery?

As is a tale, so is life: not how long it is, but how good it is, is what matters.

Bigotry is probably the thing I detest most.

But I was the most unashamed lone parent you were ever going to meet.

Death obsesses me, yes it does. I can't really understand why it doesn't obsess everyone - I think it does really, I'm just a little more out about it.

Every now and then I read a poem that does touch something in me, but I never turn to poetry for solace or pleasure in the way that I throw myself into prose.

Fear of a name increases fear of the thing itself.

Happiness can be found, even in the darkest of times, if one only remembers to turn on the light.

'Harry Potter' gave me back self respect. Harry gave me a job to do that I loved more than anything else.

His priority did not seem to be to teach them what he knew, but rather to impress upon them that nothing, not even... knowledge, was foolproof.

Honestly, I think we should be delighted people still want to read, be it on a Kindle or a Nook or whatever the latest device is.

However my parents - both of whom came from impoverished backgrounds and neither of whom had been to college, took the view that my overactive imagination was an amusing quirk that would never pay a mortgage or secure a pension.

Humans have a knack for choosing precisely the things that are worst for them.

I always have a basic plot outline, but I like to leave some things to be decided while I write.

I am not a particularly thick-skinned person.