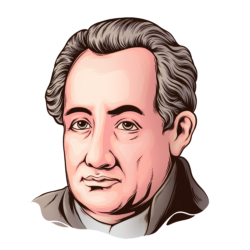 Johann Wolfgang von Goethe was a German literary figure known for his stage-worthy works particularly The Sorrows of Young Werther and the long poem Faust. He was a multi-talented personality who put his brilliance into his poems, novels, and stage plays. Wolfgang is considered as the greatest German author in the modern era whose standing equals to the country’s great philosophers.

Talk well of the absent whenever you have the opportunity.

Common sense is the genius of humanity.

The person born with a talent they are meant to use will find their greatest happiness in using it.

Every person above the ordinary has a certain mission that they are called to fulfill.

We know accurately only when we know little, with knowledge doubt increases.

He is happiest, be he king or peasant, who finds peace in his home.

There is nothing in which people more betray their character than in what they laugh at.

The soul that sees beauty may sometimes walk alone.

All the knowledge I possess everyone else can acquire, but my heart is all my own.

Many people take no care of their money till they come nearly to the end of it, and others do just the same with their time.

To rule is easy, to govern difficult.

One must ask children and birds how cherries and strawberries taste.

If children grew up according to early indications, we should have nothing but geniuses.

Nothing is worth more than this day.

Every author in some way portrays himself in his works, even if it be against his will.

Few people have the imagination for reality.

I can tell you, honest friend, what to believe: believe life; it teaches better that book or orator.

Man is made by his belief. As he believes, so he is.

To appreciate the noble is a gain which can never be torn from us.

Every step of life shows much caution is required.