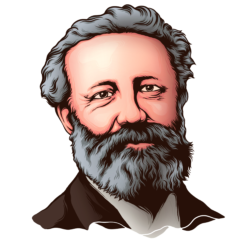 Popularly known as the Father of Science Fiction, Jules Verne was a French novelist, poet and playwright, who turned the world of science fiction into literature with his most famous books- ‘Journey to the Center of the Earth’, ‘Twenty Thousand Leagues Under the Sea’ and ‘Around the World in Eighty Days’. His books experimented with the technological innovations of the late 19th Century, but explored far more advanced realms than what was then practically possible. He also has written a number of plays, short stories, songs and poems, and his work has been adapted into television and films, theatre, music and even video games. He is also the second most translated author in the world, after Agatha Christie.

Dinner was ready. Professor Lidenbrock did full justice to it, for his compulsory fast on board had turned his stomach into an unfathomable gulf.

Perfume is the soul of the flower, and sea-flowers have no soul.

Was he being devoured by one of those secret rages, all the more terrible because contained, and which only burst forth, with irresistible force, at the last moment?

All great actions return to God, from whom they are derived.

It seems wisest to assume the worst from the beginning...and let anything better come as a surprise.

Great robbers always resemble honest folk. Fellows who have rascally faces have only one course to take, and that is to remain honest; otherwise, they would be arrested off-hand.

Reality provides us with facts so romantic that imagination itself could add nothing to them.

As for difficulties," replied Ferguson, in a serious tone, "they were made to be overcome.

If his destiny be strange, it is also sublime.

We are of opinion that instead of letting books grow moldy behind an iron grating, far from the vulgar gaze, it is better to let them wear out by being read.

It was obvious that the matter had to be settled, and evasions were distasteful to me.

Why lower oneself to taking pride from being American or British, when you can boast of being man!

He who is mistaken in an action which he sincerely believes to be right may be an enemy, but retains our esteem.

Science, my lad, is made up of mistakes, but they are mistakes which it is useful to make, because they lead little by little to the truth.

If there were no thunder, men would have little fear of lightning.

We may brave human laws, but we cannot resist natural ones.

Anything one man can imagine, other men can make real.

Man is never perfect, nor contended.

With time and thought, one can do a good job.

How many things have been denied one day, only to become realities the next!

Solitude, isolation, are painful things, and beyond human endurance.