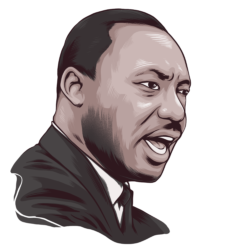 Martin Luther King Jr. was an American minister and scholar who led the civil rights movement who made a huge impact on the racial relationship between whites and black in the United States. With his activism and inspirational speeches, King played a major role in ending the legal segregation of the whites and the blacks in the United States. His liberal ideas prompted him to make the greatest public speech for the world to remember, I have a Dream.

History will have to record that the greatest tragedy of this period of social transition was not the strident clamor of the bad people, but the appalling silence of the good people.

Our lives begin to end the day we become silent about things that matter.

We must build dikes of courage to hold back the flood of fear.

If we are not careful, our colleges will produce a group of close-minded, unscientific, illogical propagandists, consumed with immoral acts. Be careful, 'brethren!' Be careful, teachers!

The God whom we worship is not a weak and incompetent God. He is able to beat back gigantic waves of opposition and to bring low prodigious mountains of evil. The ringing testimony of the Christian faith is that God is able.

World peace through nonviolent means is neither absurd nor unattainable. All other methods have failed. Thus we must begin anew. Nonviolence is a good starting point. Those of us who believe in this method can be voices of reason, sanity, and understanding amid the voices of violence, hatred, and emotion. We can very well set a mood of peace out of which a system of peace can be built.

Change does not roll in on the wheels of inevitability, but comes through continuous struggle.

Never succumb to the temptation of bitterness.

There can be no deep disappointment where there is not deep love.

I believe that unarmed truth and unconditional love will have the final word in reality. This is why right, temporarily defeated, is stronger than evil triumphant.

Our scientific power has outrun our spiritual power. We have guided missiles and misguided men.

We must come to see that the end we seek is a society at peace with itself, a society that can live with its conscience.

A genuine leader is not a searcher for consensus but a molder of consensus.

In the process of gaining our rightful place, we must not be guilty of wrongful deeds. Let us not seek to satisfy our thirst for freedom by drinking from the cup of bitterness and hatred. We must forever conduct our struggle on the high plane of dignity and discipline. We must not allow our creative protest to degenerate into physical violence. Again and again, we must rise to the majestic heights of meeting physical force with soul force.

The hope of a secure and livable world lies with disciplined nonconformists who are dedicated to justice, peace and brotherhood.

There comes a time when one must take a position that is neither safe nor politic nor popular, but he must take it because his conscience tells him it is right.

I came to the conclusion that there is an existential moment in your life when you must decide to speak for yourself; nobody else can speak for you.

Out of the mountain of despair, a stone of hope.

We must concentrate not merely on the negative expulsion of war but the positive affirmation of peace.

Injustice anywhere is a threat to justice everywhere.

The limitation of riots, moral questions aside, is that they cannot win and their participants know it. Hence, rioting is not revolutionary but reactionary because it invites defeat. It involves an emotional catharsis, but it must be followed by a sense of futility.