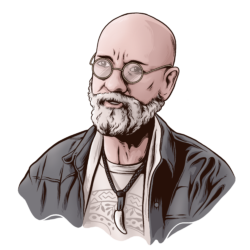 Max Igan is a motivational speaker, researcher, filmmaker, political activist, artist and author based out of Australia. He broadcasts his work mainly through his Crowhouse podcasts, as well as YouTube and also speaks at various events across the globe. Max has also produced two full-length films, The Awakening in 2011, and Trance-Formation in 2012, both of which were widely acclaimed and had more than a million viewers worldwide.

Technology isn't freedom. I'd like to be free enough to not have to log on to the computer every day.

Everything that exists is at it's most basic form simply pure energy. And energy is the stuff that drives the universe itself.

Most people simply want to complain about not being free, but they don't actually want to be free because freedom is 100% self responsibility.

We've got to stop looking for that one perfect remedy that's going to be given to us on a silver platter. We've gotta start thinking about ourselves. Realize that remedy starts at home. It starts in your own heart.

And it's time we pay attention because we are the ones who are going to shape the direction that reality goes. So the choice is upto you, it's upto each other.

We are capable of so much. Everybody has that spark of creativity and that urge to do something wonderful within them. It's in everybody.

The main thing that affects me in my path through this realm is the emotional state that I'm in, the energetic state that I convey, and the most definite part of this whole journey, the only part that is absolutely unavoidable, is exiting the realm.

Say you prove the stars are here and the stars are there. Whatever. Can you get there? Does it matter? Why don't you just enjoy looking at them, they're beautiful.

Most indigenous cultures still think with their whole brain. They still view reality from both a left and a right brain perspective. Whereas most Westernized people, people that exist within modern society, due to walking on flat ground and due to having square corners everywhere, and this completely unnatural environment that they live in, and through the constant sensory bombardment that the left brain gets, people are not even aware that they are only using half their brain. They're not even aware that a right brain perspective of reality even exists.

Keep an open mind, don't get locked into a belief system.

It's time for us all to get together. We've got to stop fighting amongst ourselves.

It is within each of us for the answers to all of the problems that we face, ultimately lie.

If we were all working together as one species and working for a way to improve the human condition, we would provide all the services that we've got for free because this is what humanity needs.

Freedom is owning yourself and being responsible for it.

Freedom is 100% liability for all your actions, everything you say and do.

Everything that exists, everything, within all creation, manifest through the harmonic vibration of light and sound.

Everything is one. Everything comes from a single source. And this is how we are connected.