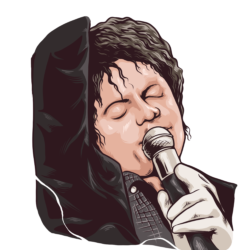 He left this world a legacy that lives on forever, the music that never dies just like his name in the world of entertainment. Regarded as the King of Pop, Michael Jackson enjoyed a top-notch career, from the Jackson 5 stardom to being a solo artist. Of all the singers who started young in their career, Jackson may have been the youngest, as he was only five years old when he joined the Jackson 5 group. Among his top hits, Jackson's Thriller had made a huge impact in the music industry, considered as the highest-selling album of all time with over 100 million copies sold worldwide.

All I ask for the negro is that if you do not like him, let him alone. If God gave him but little, that little let him enjoy.

A star can never die. It just turns into a smile and melts back into the cosmic music, the dance of life.

A wish is more than a wish, it's a goal. It's something your conscious and subconscious can help make reality.

All of us are products of our childhood.

All the things I've read in my school books about England and the Queen were okay, but my eyes are the greatest book in the world.

And that's what innocence is. It's simple and trusting like a child, not judgmental and committed to one narrow point of view. If you are locked into a pattern of thinking and responding, your creativity gets blocked. You miss the freshness and magic of the moment. Learn to be innocent again, and that freshness never fades.

Before you judge me , try hard to love me , look within your heart.

But for me the sweetest contact with God has no form. I close my eyes, look within, and enter a deep soft silence. The infinity of God's creation embraces me.

But I will never stop helping and loving people the way Jesus said to.

But they told me a man should be faithful, and walk when not able, and fight till the end but I'm only Human.

Children show me in their playful smiles the divine in everyone.

Consciousness expresses itself through creation. This world we live in is the dance of the creator. Dancers come and go in the twinkling of an eye but the dance lives on. On many an occasion when I am dancing, I have felt touched by something sacred.In those moments, I felt my spirit soar and become one with everything that exists.

Don't stop until you get enough.

Each song is a child I nourish and give my love to. But even if you have never written a song, your life is a song. How can it not be?

Everyone's Taking Control Of Me Seems That The World's Got A Role For Me I'm So Confused Will You Show To Me You'll Be There For Me And Care Enough To Bear Me.

Feeling free, let us fly, into the boundless, beyond the sky.

Hope is such a beautiful word, but it often seems very fragile. Life is still being needlessly hurt and destroyed.

How strange," the little fish said, "to miss what is everywhere", "Very strange," the old whale agreed. "Doesn't it remind you of fish who say they're thirsty?

I am especially fond of the scene where Diana asks, "What am I afraid of? Don't know what I'm made of . . ." because I've felt that way many times, even during the good moments of my life.