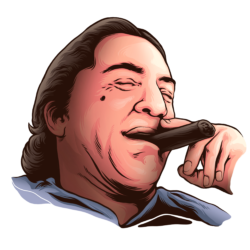 Robert De Niro is an award winning American actor, producer and director of Italian descent, and is widely considered as one of the greatest actors of all time. His many achievements include winning two Academy Awards, a Golden Globe Award, a Screen Actors Guild Life Achievement Award, and he has also been honored with the Kennedy Center Honor as well as the Presidential Medal of Freedom from U.S. President Barack Obama in 2016. Some of his best work include Godfather II, New York New York, Meet The Parents, Taxi Driver and The Deer Hunter.

Some day a real rain will come and wash all the scum off the streets.

There are certain things I am clueless about as far as the new technologies. I see these people in front of these computers all day and I don't know what they are doing - they are doing something, obviously - with Facebook, Instagram and all that. I am aware of it, but basically not in touch.

The talent is in the choices.

The saddest thing in life is wasted talent

The older you get, the more you know about certain things.

The hardest thing about being famous is that people are always nice to you.

The hardest thing about being famous is that ... in a conversation everybody's agreeing with what you're saying. ... You need people who can tell you what you don't want to hear.

The director respects what they've hired you for and chosen you for: to do the part and respect what you're doing.

The bottom line is if the movie does well, everybody is happy and they forget about what they went through. And if it doesn't, it's 'I told you.' There's one director who I won't mention, who said, 'it's all blood under the bridge.'

Thank God for the rain to wash the trash off the sidewalk.

Somebody steals from me, I'm gonna say you stole. Not talk to him for spitting on the sidewalk. Understand?

There is a certain combination of anarchy and discipline in the way I work.

Running a casino is like robbing a bank with no cops around. For guys like me, Las Vegas washes away your sins. It's like a morality car wash.

One regret I have: I didn't get as much of the family history as I could have for the kids.

One of the things about acting is it allows you to live other people's lives without having to pay the price.

New York is more exciting, I guess, than even Paris or London. New York's the center of something; I don't know what, really - the center of a lot of things. With all its problems and chaos and craziness, it's still a great place to live. I can't see myself living anywhere else.

My definition of a good hotel is a place I'd stay at.

Movies are hard work. The public doesn't see that. The critics don't see it. But they're a lot of work. A lot of work.

Movies are hard to make, and you have to work toward a common ethic and do your best. You don't want to work with people who don't care or who are acting out some neurotic, crazy thesis on the set.

Loneliness has been following me my whole life.

Write down everything you want to do with your life and then spend the next 25 years doing them.

You'll have time to rest when you're dead.

You learned the two greatest thing in life, never rat on your friends, and always keep your mouth shut.

You have to think about one shot. One shot is what it's all about. A deer's gotta be taken with one shot.