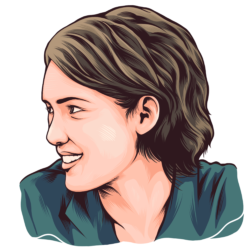 Winona Laura Horowitz, famously known as Winona Ryder is an American actress who had received several awards for her notable talent in acting. She earned popularity for her defining-career role in the hit show Stranger Things, and other films such as Heathers, Edward Scissorhands, and A Scanner Darkly. Before those successful projects, Winona first appeared on screen in the movie drama Lucas in 1986. In 1988, she played the quirky role of Lydia in a horror-comedy film of Tim Burton’s Beetlejuice.

I love books and going to bookstores. My favorite sound is the sound of the needle hitting the record.

My father is an atheist. My mother is Buddhist. They encouraged my siblings and me to take the best part of other religions to make our own belief system.

The older you get, the more yourself you can be and the less worried you are about what other people think.

I am not a person who can really sit around and think about regrets because, with every bad experience that you have, there is weirdly something good that comes from it.

I feel like I had to learn how to take care of myself and find out what made me happy aside from just making films.

I love photography and first editions. I have that in my genes.