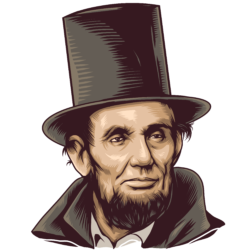 Born in a log cabin in Kentucky, Abraham Lincoln is proof that greatness can have the most humble of beginnings. Abraham Lincoln was a lawyer and the 16th President of the United States. Lincoln issued the Emancipation Proclamation, which later led to the indefinite freedom of slaves. Unfortunately assassinated by John Wilkes Booth by a gunshot to the head, an event that ironically became responsible for much civil change in the years to come.

Leave nothing for tomorrow which can be done today.

The ballot is stronger than the bullet.

Tact: the ability to describe others as they see themselves.

Surely God would not have created such a being as man, with an ability to grasp the infinite, to exist only for a day! No, no, man was made for immortality.

No man has a good enough memory to be a successful liar.

My best friend is a person who will give me a book I have not read.

Man is not the only animal who labors; but he is the only one who improves his workmanship.

Love is the chain to lock a child to its parent.

Life is hard but so very beautiful.

Let us have faith that right makes might, and in that faith, let us, to the end, dare to do our duty as we understand it.

Let every American, every lover of liberty, every well wisher to his posterity, swear by the blood of the Revolution, never to violate in the least particular, the laws of the country; and never to tolerate their violation by others.

The best way to predict your future is to create it.

Labor is prior to, and independent of, capital. Capital is only the fruit of labor, and could never have existed if labor had not first existed. Labor is the superior of capital, and deserves much the higher consideration.

It often requires more courage to dare to do right than to fear to do wrong.

It has been my experience that folks who have no vices have very few virtues.

In this sad world of ours sorrow comes to all and it often comes with bitter agony. Perfect relief is not possible except with time. You cannot now believe that you will ever feel better. But this is not true. You are sure to be happy again. Knowing this, truly believing it will make you less miserable now. I have had enough experience to make this statement.

In regard to this Great Book, I have but to say, it is the best gift God has given to man. All the good the Savior gave to the world was communicated through this book.

Important principles may, and must, be inflexible.

If you would win a man to your cause first convince him that you are his sincere friend.

If we have no friends, we have no pleasure; and if we have them, we are sure to lose them, and be doubly pained by the loss.

If we could first know where we are, and whither we are tending, we could then better judge what to do, and how to do it.

If there is anything that a man can do well, I say let him do it. Give him a chance.

If slavery is not wrong, nothing is wrong.