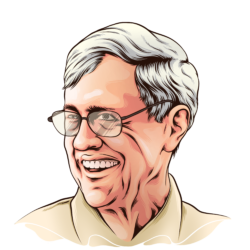 Charles de Ganahl Koch is the co-owner, chairman and CEO of Koch Industries, owning 42% of the conglomerate, which he and his brother inherited from their father, Fred G. Koch, the founder of the company. Originally involved in oil refinery, Koch Industries has expanded into various fields including polymer, forest and consumer products, minerals, services, amongst others, and is the largest privately held company by revenue in the United States. As of August 2021, Charles G. Koch has been ranked as the 20th richest person in the world. Koch has also written three books detailing his business philosophy, supports various educational institutions including the Ayn Rand Institute, and undertakes and supports many philanthropic endeavors with his wife and brother.

The process of discovery begins when we observe, often vaguely, a gap between what is and what could be.

Our willingness to move quickly, absorb more risk and give better service enabled us to become the leading crude oil gathering company.

Past performance does not guarantee future success.

People benefit through profit and loss according to the value they create in society.

Prosperity is only possible in a system where property rights are clearly and properly defined and protected, people are free to speak, exchange and contract, and prices are free to guide beneficial action.

Prudent risk-taking should be encouraged by applying the concept of opportunity cost.

Repeatedly asking for government help undermines the foundations of society by destroying initiative and responsibility. It is also a fatal blow to efficiency and corrupts the political process.

Successful entrepreneurs are not deterred by their lack of authority to control resources.

Surprisingly, my father gave me almost complete freedom in the management of Koch Engineering. He told me I could do anything I wanted with it, short of selling it.

The easy way to make money is to get special political privilege. From the beginning of time, business has cozied up to government and gotten restrictions on competition and subsidies and stuff.

The most difficult and painful of all changes: A change in the way we think.

No centralized government, no matter how big, how smart or how powerful, can effectively and efficiently control much of society in a beneficial way. On the contrary, big governments are inherently inefficient and harmful.

The role of business in society is to help people improve their lives by providing products and services they value more highly than their alternatives, and to do so while consuming fewer resources.

The size of the experiment should have been limited in proportion to the risk-adjusted potential of the opportunity.

To the person with only a hammer and no understanding, every problem looks like a nail.

Vision for us is not a one-time statement of goals and aspirations, but a dynamic concept, always evolving based on continual examination of how we can create value for our customers and for society.

We all tend to pursue our own interests, but in a true market economy we can only prosper by providing others with what they value.

We must measure what leads to results, not simply what is easy to measure.

We needed to be uncompromising with our workforce, to expect 100 percent of our employees to comply 100 percent of the time with complex and ever-changing government mandates. Striving to comply with every law does not mean agreeing with every law. But, even when faced with laws we think are counter-productive, we must first comply. Only then, from a credible position, can we enter into a dialogue with regulatory agencies to demonstrate alternatives that are more beneficial. If these efforts fail, we can then join with others in using education and/or political efforts to change the law.

We try to evaluate how much value an employee is creating here and reward them accordingly.

When everyone gets something for nothing, soon no one will have anything, because no one will be producing anything.

When you start attacking cronyism and peoples political interests, it gets nasty.

I believe that cronyism is nothing more than welfare for the rich and powerful, and should be abolished.

I believe my business and non-profit investments are much more beneficial to societal well-being than sending more money to Washington.

Allowing people the freedom to pursue their own interests, within beneficial rules of just conduct, is the best and only sustainable way to promote societal progress.