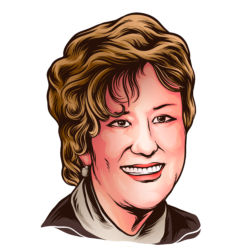 Esther Hicks is an American motivational speaker and author, having co-authored nine books as well as presented numerous workshops with her late husband, Jerry Hicks. Their main focus has been on the Law of Attraction. Their work has also been the inspiration behind the 2006 movie, The Secret, in which she had also narrated and made an appearance, but it was later removed from the final edit. Hicks has also authored a series of children’s books titled Sara.

It's about you, giving yourself permission to be who you are, without giving a rip about what anybody else is thinking about it.

You will know your path by the fun of it.

Think about where you're going and never mind where you've been. Don't spend any more time justifying any of that stuff.

The greatest irony in the world is that you are so blessed and don't know it.

People will love you. People will hate you. And none of it will have anything to do with you.

Worrying is using your imagination to create something you don't want.

A happy life is just a string of happy moments. But most people don't allow the happy moment, because they're so busy trying to get a happy life.

You are free. You are powerful. You are good. You are love. You have value. You have purpose. All is well.

When you feel gratitude, you are the closest to the natural state you were born to live in.

It is the way you feel that is your point of attraction.

When you focus upon lack in an attitude of complaining, you establish a vibrational point of attraction that then gives you access only to more thoughts of complaint. Your deliberate effort to tell a new story will establish a new pattern of thought, providing you with a new point of attraction from your present, about your past, and into your future. The simple effort of looking for positive aspects will set a new vibrational tone that will begin the immediate attraction of thoughts, people, circumstances, and things that are pleasing to you.

Fear only exists when you do not understand that you have the power to project thought and that the Universe will respond.

99.99% of your creation is complete before you see ANY physical evidence of it.

Once you envision something and the Universal forces come into play to help you in the creation of it, there's never again going to be enough action for you to keep up with it. You can't use the Energy that creates worlds to create a situation and then find the action to keep up with it. You have to keep envisioning. You have to keep imagining it better.

With the right alignment, everything you want makes its way into your experience. You are the keeper of your own gate.

Find something to feel good about and get out of the way, and allow the cells to receive what they've been asking for. That is the key to healing.

Like the air you breathe, abundance in all things is available to you. Your life will simply be as good as you allow it to be.

Use whatever excuse you can to vibrate in harmony with those things you've been saying you want. And when you do, those things that are a vibrational equivalent flow into your experience in abundance. Not because you deserve it, not because you've earned it, but because it's the natural consequence of the Law of Attraction. That which is like unto itself is drawn.

A belief is really only a thought that you keep thinking.