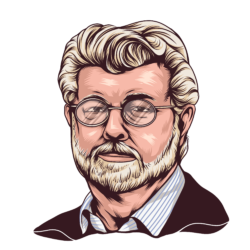 Meet the person behind the screen of the top grossing films- Star Wars and Indiana Jones. His name is George Walton Lucas, Jr. an American motion- pictures director, producer, and screenwriter, the man who created the most popular films in history. He founded the production company Lucas Films Ltd. His great success in film production enabled him to create the popular character of an adventurous archeologist Indiana Jones which was played by Harrison Ford.

I was never interested in being powerful or famous. But once I got to film school and learned about movies, I just fell in love with it. I didn't care what kind of movies I made.

All art is dependent on technology because it's a human endeavour, so even when you're using charcoal on a wall or designed the proscenium arch, that's technology.

Film is not an easy occupation. There's a lot of occupations that are difficult and film is one of them.

It was the money from 'Star Wars' and 'Jaws' that allowed the theaters to build their multiplexes, which allowed an opening up of screens.