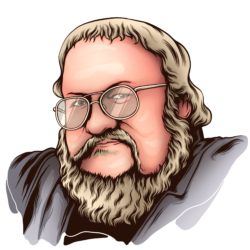 George R. R. Martin is the author of the Emmy-award winning HBO series – The Game of Thrones, which was adapted from his fantasy novels – A Song of Ice and Fire. Born in New Jersey, he began his writing career at an early age, and sold his first science fiction short stories in 1970, at the age of 21, to Galaxy magazine, which was nominated for the Hugo Award. He also worked in Hollywood for a few years, writing and adapting screenplays, though many of his TV pilots and movie scripts got cancelled before being made. Frustrated, he returned to full-time writing, and began working on A Song of Ice and Fire in 1991, publishing the first book of the series in 1996, with two of its books still underway to being completed. In 2007 HBO bought the rights to the series, with Martin being involved in co-writing the scripts for the seasons. The show had a record viewership worldwide, receiving 59 Emmy awards, the most for a drama series.

... a mind needs books as a sword needs a whetstone, if it is to keep its edge.

A lot of writing takes place in the subconscious, and it's bound to have an effect.

A reader lives a thousand lives before he dies, said Jojen. The man who never reads lives only one.

All fiction has to have a certain amount of truth in it to be powerful.

An awful lot of fantasy, and even some great fantasy, falls into the mistake of assuming that a good man will be a good king, that all that is necessary is to be a decent human being and when you're king everything will go swimmingly.

And I have a tender spot in my heart for cripples and bastards and broken things.

As Faulkner says, all of us have the capacity in us for great good and for great evil, for love but also for hate. I wanted to write those kinds of complex character in a fantasy, and not just have all the good people get together to fight the bad guy.

Believe it or not, I worked four summers in college as a sports writer covering baseball for a parks and rec department in Bayonne, N.J.

Boy, there are days where I get up and say 'Where the hell did my talent go? Look at this crap that I'm producing here. This is terrible. Look, I wrote this yesterday. I hate this, I hate this.'

Bran thought about it. 'Can a man still be brave if he's afraid?' 'That is the only time a man can be brave,' his father told him.

Death is so terribly final, while life is full of possibilities.

'Dreamsongs' allows me to show the scope of my writing - with personal commentary that puts the works in context and includes some autobiographical details intended to reveal how each piece came to be, what it represents, and how it has formed, or been informed by, my philosophy of writing.

Every man must die, Jon Snow. But first he must live.

Fantasy is silver and scarlet, indigo and azure, obsidian veined with gold and lapis lazuli. Reality is plywood and plastic, done up in mud brown and olive drab. Fantasy tastes of habaneros and honey, cinnamon and cloves, rare red meat and wines as sweet as summer. Reality is beans and tofu, and ashes at the end. Reality is the strip malls of Burbank, the smokestacks of Cleveland, a parking garage in Newark. Fantasy is the towers of Minas Tirith, the ancient stones of Gormenghast, the halls of Camelot. Fantasy flies on the wings of Icarus, reality on Southwest Airlines. Why do our dreams become so much smaller when they finally come true?

Fiction is lies; we're writing about people who never existed and events that never happened when we write fiction, whether its science fiction or fantasy or western mystery stories or so-called literary stories. All those things are essentially untrue. But it has to have a truth at the core of it.

I believe that a writer learns from every story he writes, and when you try different things, you learn different lessons. Working with other writers, as in Hollywood or in a shared world series, will also strengthen your skills, by exposing you to new ways of seeing the work, and different approaches to certain creative challenges.

I can see a scene in my head, and when I try to get it down in words on paper, the words are clunky; the scene is not coming across right. So frustrating. And there are days where it keeps flowing. Open the floodgates, and there it is. Pages and pages coming. Where the hell does this all come from? I don't know.

I do get invitations all of the time to play actual fantasy football, by the way, but I get the feeling that I'd like it too much. I have enough demands on my time. My fans would kill me.

I don't know if I have any particular views about women in positions of power, though I do think it's more difficult for women, particularly in a Medieval setting. They have the additional problem that they're a woman and people don't want them in a position of power in an essentially patriarchal society.

I find religion and spirituality fascinating. I would like to believe this isn't the end and there's something more, but I can't convince the rational part of me that that makes any sense whatsoever.

I grew up with four T.V. channels. If you missed a show, you missed it. You gotta wait a week for the next one. I'd mail-order books: take a quarter, get an envelope, send off for it and wait until it arrived. I grew up waiting for things.

I had a couple of friends, but I was mostly the kid with his nose in a book.

I had an encyclopedia with a list of flags in the back, so I would look at all these flags of China and Liberia and England and Denmark and whatever, and I learned all the different flags, and I tried to imagine what it would be like to be voyaging on some of these ships.