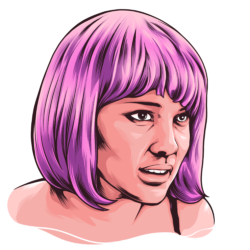 She is such a pretty face who dominates the world of the film industry as a leading actress and garnered enormous awards for her exceptional talent in acting. Natalie Portman was born on June 9, 1981, to an American mother and Israeli father in Jerusalem. Natalie had her first public exposure as a model by the age of 11 and later on turned into acting. Portman was turned down when she auditioned for the lead role of the film Mathilda, but she avenged herself by having successful movies in later years. Portman had starred in multiple top-grossing films like the Black Swan, Star Wars, V for Vendetta, and a lot more.

There are movies where we are interested in seeing people's lives without agreeing with what they're doing.

Sometimes I think people who are unattractive have it easier.

I'm not convinced about marriage. Divorce is so easy, and that fact that gay people are not allowed to marry takes much of the meaning out of it. Committing yourself to one person is sacred.

The best part about being friends with your parents is that no matter what you do, they have to keep loving you.

I was definitely different from the other kids... I was more ambitious. I knew what I liked and what I wanted, and I worked really hard. I was a very serious kid.

I think school is so much harder than real life. People are so much more accepting when they are adults.

I am not someone who sacrifice all for the cinema, my life will be always more important.

Ninety per cent of how you learn is watching great people. When you are surrounded by good actors it lifts your performance.

I was really popular up until 13, really outgoing and bossy, and never worried about seeming it.

I don't mean to criticize anyone in any way that I wouldn't criticize myself. I think people should have fun, and have a good time, and enjoy the luck that we have to be lazy and dwell in consumerism. But I think that it's a balance. And our job as actors is empathy.

Going to a party, for me, is as much a learning experience as, you know, sitting in a lecture.

I tend to lean toward strong female stories. I want to make things that don't already exist out there.

Just sitting in a room until 4 a.m. and listening to some other kids talk about what they have done in their lives is just the greatest learning experience I have ever had.

Awards are so unnecessary, because I think we get so much out of our work just by doing it. The work is a reward in itself.

I remember how to be a person by being around them.

I don't know who would not classify themselves as a romantic. I think that would be sort of sad.