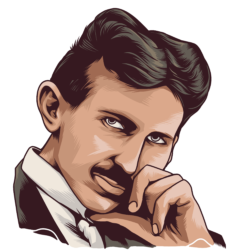 Nikola Tesla was a Serbian-American engineer and physicist who made a huge contribution to the age of innovation and technological advancement. His genius and talent enabled him to invent the first alternating current (AC) motor and developed AC generation and transmission technology. Tesla had worked with Thomas Edison’s company in New York and then left the job after a misunderstanding with his employer Edison. Later, he was hired by Westinghouse, he got a patent license on his AC motor and was given his own lab. With his new lab, Tesla was well equipped to invent electric oscillators, meters, improved lights, and the high-voltage transformer which he named after himself, the Tesla coil.

My brain is only a receiver, in the Universe there is a core from which we obtain knowledge, strength and inspiration.

Let the future tell the truth, and evaluate each one according to his work and accomplishments. The present is theirs; the future, for which I have really worked, is mine.

We are whirling through endless space, with an inconceivable speed, all around everything is spinning, everything is moving, everywhere there is energy.

Though free to think and act, we are held together, like the stars in the firmament with tics inseparable. These tics cannot be seen, but we can feel them.

The female mind has demonstrated a capacity for all the mental acquirements and achievements of men, and as generations ensue that capacity will be expanded; the average woman will be as well educated as the average man, and then better educated, for the dormant faculties of her brain will be stimulated to an activity that will be all the more intense and powerful because of centuries of repose. Woman will ignore precedent and startle civilization with their progress.

Life is and will ever remain an equation incapable of solution, but it contains certain known factors.

The harness of waterfalls is the most economical method known for drawing energy from the sun.

Every living being is an engine geared to the wheelwork of the universe. Though seemingly affected only by its immediate surrounding, the sphere of external influence extends to infinite distance.

But instinct is something which transcends knowledge. We have, undoubtedly, certain finer fibers that enable us to perceive truths when logical deduction, or any other willful effort of the brain, is futile.

Most persons are so absorbed in the contemplation of the outside world that they are wholly oblivious to what is passing on within themselves.

Peace can only come as a natural consequence of universal enlightenment and merging of races, and we are still far from this blissful realization.

As I review the events of my past life I realize how subtle are the influences that shape our destinies.

In a time not distant, it will be possible to flash any image formed in thought on a screen and render it visible at any place desired. The perfection of this means of reading thought will create a revolution for the better in all our social relations.

That is the trouble with many inventors; they lack patience. They lack the willingness to work a thing out slowly and clearly and sharply in their mind, so that they can actually 'feel it work.' They want to try their first idea right off; and the result is they use up lots of money and lots of good material, only to find eventually that they are working in the wrong direction. We all make mistakes, and it is better to make them before we begin.

We build but to tear down. Most of our work and resource is squandered. Our onward march is marked by devastation. Everywhere there is an appalling loss of time, effort and life. A cheerless view, but true.

It will soon be possible to transmit wireless messages around the world so simply that any individual can carry and operate his own apparatus.

Intelligent people tend to have less friends than the average person. The smarter you are, the more selective you become.

The individual is ephemeral, races and nations come and pass away, but man remains.

Anti-social behaviour is a trait of intelligence in a world full of conformists.

The gift of mental power comes from God, Divine Being, and if we concentrate our minds on that truth, we become in tune with this great power.

My brain is only a receiver, in the Universe, there is a core from which we obtain knowledge, strength and inspiration. I have not penetrated into the secrets of this core, but I know that it exists.

My method is different. I do not rush into actual work. When I get a new idea, I start at once building it up in my imagination, and make improvements and operate the device in my mind. When I have gone so far as to embody everything in my invention, every possible improvement I can think of, and when I see no fault anywhere, I put into concrete form the final product of my brain.

There is no energy in matter other than that received from the environment.

It is paradoxical, yet true, to say, that the more we know, the more ignorant we become in the absolute sense, for it is only through enlightenment that we become conscious of our limitations. Precisely one of the most gratifying results of intellectual evolution is the continuous opening up of new and greater prospects.

The hardest part of returning to a truly healthy environment may be changing the current totally unsustainable heavy-meat-eating culture of increasing numbers of people around the world. But we must try. We must make a start, one by one.