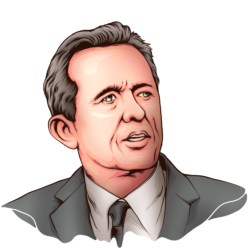 Robert F. Kennedy, Jr. is an American environmental lawyer, author and a vocal activist against vaccination, promoting the scientifically discredited theory that vaccination causes autism. Born into the prestigious Kennedy family, he is the son of the late Robert F Kennedy, a U.S. Senator, who was assassinated during his presidential campaign in 1968, and is the nephew of the late U.S. President, John F. Kennedy, also assassinated during his tenure as President. He is the co-founder and president of Waterkeeper Alliance, a non-profit environmental group, professor emeritus of environmental law at Pace University and has also authored two New York Times bestsellers. In 2009 he was named by Rolling Stones as one of the “100 Agents of Change”.

One out of every six American women has so much mercury in her womb that her children are at risk for a grim inventory of diseases, including autism, blindness, mental retardation and heart, liver and kidney disease.

The next time you see John Stossel or Glenn Beck or Rush Limbaugh or Sean Hannity, these flat-Earthers, these corporate toadies, lying to you, lying to the American public, and telling you that global warming doesn't exist. You send an e-mail to their advertisers and tell them that you're not going to buy their products anymore.

In a true free market economy, you can't make yourself rich without enriching your community.

We know more about Tom [Cruise] and Katie [Holmes] than we do about global warming. We're the most entertained, least informed people in the world.

Resurrecting American democracy is vital to averting climate catastrophe. We must first repeal the Supreme Court's Citizens United ruling, which has flooded elections with billions of oily petrodollars from carbon tycoons.

American democracy is supposed to be the paradigm for the rest of the world, and it no longer is. Citizens cannot be guaranteed that they can walk into a voting booth with any assurance that their vote will be counted.

The Republicans are 90% corrupt, and the Democrats are 50% corrupt.

Industrial agriculture now accounts for over half of America's water pollution. Two years ago, Pfiesteria outbreaks connected with wastes from industrial chicken factories forced the closure of two major tributaries of the Chesapeake and threatened Maryland's vital shellfish industry. Tyson Foods has polluted half of all streams in north-western Arkansas with so much faecal bacteria that swimming is prohibited. Drugs and hormones needed to keep confined animals alive and growing are mainly excreted with the wastes and saturate local waterways.

We need election reform because our elections are being stolen. And these huge powerful voting machine vending companies have privatized the election process in our country.

Some corporations don't want free markets, and they don't want democracy. They want profits. And they use our campaign finance system to loot our commons, to steal from our treasury, and the other shared resources of our community - the air, the water, the public lands, the wildlife, the things that belong to all of us that are held in trust for future generations. Corporations cannot act philanthropically in America.

American democracy is supposed to be the paradigm for the rest of the world.

The technologies for the alternative energy sources exists today. The economics are compelling. The public health is compelling. Why would we maintain a focus on a 17th-century technology, when there are 21st-century alternatives that are both necessary and available? And the answer is the subversion of democracy.

We protect nature not for nature's sake but for our own sake because it's the infrastructure of our communities.

Sometimes it's more important to change politicians than light bulbs.

Corporate polluters, their phony think tanks and political toadies like to marginalize environmentalists as tree huggers, or radicals. But there is nothing radical about clean air or water.

The way you get democracy to function is by informing the public.

It is more important to be of service than successful.

We're not protecting the environment for the sake of the fishes and the birds. We're protecting it for our own sake.

Corporations are a good thing. But corporations should not be running our government... They have driven the American economy since its founding, and the prosperity of our country is largely dependent on the free operation of corporations. But some corporations don't want free markets, and they don't want democracy. They want profits.

There are really only two stories the coal industry tells: "Coal keeps the lights on, and by implication, you'll live in medieval, soul-shattering darkness if you don't let us do whatever the hell we want with the landscape and drinking water you public health, because there's no alternative.

Large-scale hog producers are a greater threat to the United States and U.S. democracy than Osama bin Laden and his terrorist network.

What polluters do is raise the standards of living for themselves, while lowering the quality of living for everybody else, and they do that by escaping the disciplines of the free market.

The best measure of how a democracy is functioning is how it allocates the goods of the land, the public trust assets.