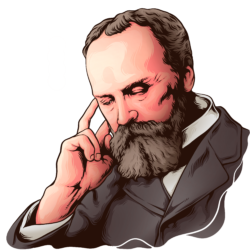 William James is a renowned American philosopher, educator and psychologist and is considered a leading thinker of his day and age, being ranked as the 14th most prominent psychologist of the 20th Century. He is referred to as the “Father of American Psychology” and was the first to give a psychology course in the United States of America at Harvard University in 1875. He has also written numerous books on varied topics, the most influential amongst them being ‘The Principles of Psychology’, which is still considered as a ground breaking work in the field of psychology.

Action seems to follow feeling, but really action and feeling go together; and by regulating the action, which is under the more direct control of the will, we can indirectly regulate the feeling, which is not.

The sway of alcohol over mankind is unquestionably due to its power to stimulate the mystical faculties of human nature, usually crushed to earth by the cold facts and dry criticisms of the sober hour.

The union of the mathematician with the poet, fervor with measure, passion with correctness, this surely is the ideal.

The prevalent fear of poverty among the educated classes is the worst moral disease from which our civilization suffers.

The moral flabbiness born of the exclusive worship of the bitch-goddess SUCCESS. That - with the squalid cash interpretation put on the word 'success' - is our national disease.

The minute a man ceases to grow, no matter what his years, that minute he begins to be old.

The means have murdered the end.

The lunatic's visions of horror are all drawn from the material of daily fact. Our civilization is founded on the shambles, and every individual existence goes out in a lonely spasm of helpless agony.

The greatest weapon against stress is our ability to choose one thought over another.

The greatest revolution of our generation is the discovery that human beings by changing the inner attitudes of their minds, can change the outer aspects of their lives.

The greatest discovery of any generation is that a human can alter his life by altering his attitude.

The great use of life is to spend it for something that will outlast it.

The exclusive worship of the bitch-goddess sucess is our national disease.

The deepest principle in human nature is the craving to be appreciated.

The attempt at introspective analysis... is in fact like seizing a spinning top to catch its motion, or trying to turn up the gas quickly enough to see the darkness.

The art of being wise is knowing what to overlook.

The aim of a college education is to teach you to know a good man when you see one.

Seize the very first possible opportunity to act on every resolution you make, and on every emotional prompting you may experience in the direction of the habits you aspire to gain.

Science, like life, feeds on its own decay. New facts burst old rules; then newly divined conceptions bind old and new together into a reconciling law.

Religion is a monumental chapter in the history of human egotism.

Psychology is the science of mental life.