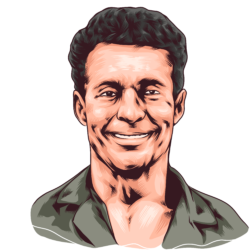 Francois Henri "Jack" LaLanne was an American television program host, nutrition guru, and was regarded as the “Father of Modern Fitness”. He got this title when he introduced weight training and invented gym machines that most people still use today. In his younger years, LaLanne admitted that he was a sugarholic and a junk food junkie. Good thing, the young Lalanne realized his bad diet habits and turned into healthy foods. He inspired people to eat less meat and indulge in fish and mostly vegetable diet.

The food you eat today is walking and talking tomorrow.

The only way you get that fat off is to eat less and exercise more.

How do you build up your bank account? By putting something in it everyday.Your health account is no different. What I do today, I am wearing tomorrow. If I put inferior foods in my body today, I'm going to be inferior tomorrow, it's that simple.

Those who begin to exercise regularly and replace white flour, sugar and devitalized foods with live, organic natural foods begin to feel better immediately. Exercise is king, nutrition is queen -- put them together and you've got a kingdom.

You can exercise vigorously and eat junk and get by. But you can't eat perfectly and not exercise. Look at many athletes today; they are human garbage cans. They eat anything, but they exercise so hard they burn it up. But why not exercise and put the right fuel in too?

Virtually everything we do in life is a matter of habit. Habits make us who we are. Why not change your habits to better your life?

If it tastes good, spit it out. All those cakes and pies and candy and ice cream -- all that terrible fast food stuff! I just bought a new corvette sports car ... would I put oil in the gas tank? Would I?

There is no fountain of youth, What you put into your body is what you get out of it. You would not feed your dog a coffee and doughnut for breakfast followed by a cigarette. You will kill the damn dog.

You put junk in, junk comes out. You put good in, good comes out.

There are so many health food nuts out there that eat nothing but natural foods but they don't exercise and they look terrible.

Whatever you can handle, it's up to you. Pick something where you are going to do it to failure--in other words, where you can hardly do it. That's the key. So many people will just take five pound weights and do something 10 times. What are they getting out of it? Nothing! Say you are going to build up your bank account. If you put in a penny a day, it's going take a long while. It's the same with exercise--the more you put into it the more you take out.

Everything you do in life, I don't care, good or bad - don't blame God, don't blame the devil, don't blame me, blame you. You control everything! The thoughts you think, the words you utter, the foods you eat, the exercise you do. Everything is controlled by you.

Develop a positive attitude. Think and picture how amazing you are going to be. Visualize it!

Don't talk age! Age has nothing to do with it. One of my guys who started out at my gym is 87 now, and he still does ten bench-press reps with a hundred-pound dumbbell in each hand. He's training to set a leg-pressing record. I put things in the guy's brain way back when, and now he'll never get away from it.

Never get satisfied. The minute you stop trying, you go downhill.

You only live once, why be miserable? Fat people are miserable -- you are carrying 50 lbs on your shoulders all day, you get a disease called "pooped-out itis". Don't tell me that they are happy with the way they look and feel. I have to be honest, that is all I have.

That is the beautiful part about weights: even if you are 100 year old, you can lift something. Maybe it's only a half a pound or a pound or two pounds. It will still do something.

You should do it against the clock. Say you are going to do 30 laps in 15 minutes. Then you try to do it each day a little faster. That is putting demands on the body, and that is how you build up. You keep up your energy instead of going downhill.

You need to make good health a hobby.

Ask the guys who are doing serious triathlons if there are any limits to what can be done. The limit is right here. You've got to get physically fit between the ears. Muscles don't know anything. They have to be taught.

It's difficult to change overnight but if you are persistent and take one step at a time you will see results!

Never, ever get satisfied; keep the carrot in front of the horse.

People don't die of old age, they die of neglect.