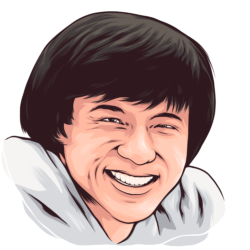 Who would not know this world-famous actor who made huge success in all of his films? But there are things that you may not know about him. Famous for his action stunts, Jackie Chan did use stuntmen sometimes as stand-ins when his character needs to just walk around, drive, or take menial acts so he can rest for a while. Aside from his courageous stunts, Chan earned the Guinness World Record for most credits on his movie Chinese Zodiac. He just didn’t take the lead role in the film but he’s also the director, fight choreographer, composer, art director, unit production manager, gaffer, theme tune vocalist, writer, cinematographer, stuntman, prop work, and catering coordinator. All hands for this film genius.

It is totally different making films in the East than in the West. In the East, I make my own Jackie Chan films, and it's like my family. Sometimes I pick up the camera because I choreograph all the fighting scenes, even when I'm not fighting. I don't have my own chair. I just sit on the set with everybody.

My wish is to bring my heroes to the big screen, and many of them have already appeared in my films.

My dream is to continue filming until my body tells me to stop.

My affection for Taiwan... is witnessed by everyone. My wife is Taiwanese and I am a son-in-law of Taiwan. I am half Taiwanese.

Most of the time, I'm not even working; I'm just helping people, because I feel that I am too lucky.

Money for me today does not really matter.

Jackie Chan is a myth.

I've seen too many ups and downs in the movie industry.

I've got a very interesting background.

I've choreographed all of my movies.

Now I am older, I understand we have to accept who we are.

In the real world, children love me.

In the past when I was in Hollywood, I was like a dog. I felt humiliated. My English was not good. People would even ask me 'Jackie Who?'

I'm not sure if it's good to have freedom or not. I'm really confused now.

I'm gradually beginning to feel that we Chinese need to be controlled. If we're not being controlled, we'll just do what we want.

I'm crazy, but I'm not stupid.

If there really is a god, then he really looks after me.

If one does not attach himself to people and desires, never shall his heart be broken. But then, does he ever truly live?

If everyone does some good, think of what a good world this will be.

We learn martial arts as helping weakness. You never fight for people to get hurt. You're always helping people.