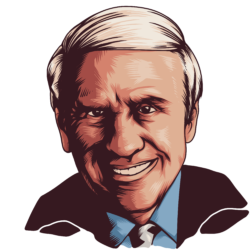 Those who want to get rich must learn from this man who earned his wealth in just six years. Emanuel James Rohn was an American entrepreneur, author and motivational speaker. Rohn learned his personal development from his mentor Earl Shoaff. He attended most of Shoaff’s lectures and later on applied his learnings and joined the direct selling industry. Rohn helped people with his life strategies and inspiring them to look beyond and think of the possibilities that life has to offer. He mentored the founder of Herbalife Mark R. Hughes and life coach Tony Robbins. Other successful individuals also gave credit to Rohn’s influence in their careers.

Whoever renders service to many puts himself in line for greatness - great wealth, great return, great satisfaction, great reputation, and great joy.

Never wish life were easier, wish that you were better.

Failure is simply a few errors in judgment, repeated every day.

Giving is better than receiving because giving starts the receiving process.

If you don't like how things are, change it! You're not a tree.

Without a sense of urgency, desire loses its value.

Success is nothing more than a few simple disciplines, practiced every day.

Your philosophy determines whether you will go for the disciplines or continue the errors.

Successful people have libraries. The rest have big screen TVs.

You have two choices: You can make a living or you can design a life.

The ultimate reason for setting goals is to entice you to become the person it takes to achieve them.

If you are not willing to risk the unusual, you will have to settle for the ordinary.

Affirmation without discipline is the beginning of delusion.

For every disciplined effort there is a multiple reward.

It is the set of the sails, not the direction of the wind that determines which way we will go.

The walls we build around us to keep sadness out also keeps out the joy.

To solve any problem, here are three questions to ask yourself: First, what could I do? Second, what could I read? And third, who could I ask?