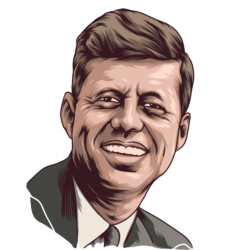 John Fitzgerald Kennedy was the 35th President of the United States of America and the youngest man ever elected to the office. Kennedy was noted for his Nuclear-Test-Ban Treaty and the Alliance for Progress. He was born to a known and wealthy family in Brookline, Massachusetts. His paternal grandfather was a banker and liquor trader, while his maternal grandfather was a politician who had served as a congressman and as a mayor in Boston. Unlike other successful men history who had a difficult childhood, JFK enjoyed life with more than enough of what he needs. He grew up as a mediocre student who would always prefer leisure over duty. Who would have thought that this mischievous boy would grow up to become the president of the United States.

As we express our gratitude, we must never forget that the highest appreciation is not to utter words, but to live by them.

Let us not seek the Republican answer or the Democratic answer, but the right answer. Let us not seek to fix the blame for the past. Let us accept our own responsibility for the future.

Change is the law of life. And those who look only to the past or present are certain to miss the future.

There are risks and costs to action. But they are far less than the long range risks of comfortable inaction.

When written in Chinese, the word 'crisis' is composed of two characters. One represents danger and the other represents opportunity.

The greater our knowledge increases the more our ignorance unfolds.

Let the word go forth from this time and place, to friend and foe alike, that the torch has been passed to a new generation of Americans - born in this century, tempered by war, disciplined by a hard and bitter peace.

Man is still the most extraordinary computer of all.

Tolerance implies no lack of commitment to one's own beliefs. Rather it condemns the oppression or persecution of others.

The great enemy of the truth is very often not the lie, deliberate, contrived and dishonest, but the myth, persistent, persuasive and unrealistic.

The goal of education is the advancement of knowledge and the dissemination of truth.

History is a relentless master. It has no present, only the past rushing into the future. To try to hold fast is to be swept aside.

Mothers all want their sons to grow up to be president, but they don't want them to become politicians in the process.

If we cannot now end our differences, at least we can help make the world safe for diversity.

When we got into office, the thing that surprised me most was to find that things were just as bad as we'd been saying they were.

I think 'Hail to the Chief' has a nice ring to it.

Forgive your enemies, but never forget their names.

The courage of life is often a less dramatic spectacle than the courage of a final moment; but it is no less a magnificent mixture of triumph and tragedy.

I am sorry to say that there is too much point to the wisecrack that life is extinct on other planets because their scientists were more advanced than ours.

Too often we... enjoy the comfort of opinion without the discomfort of thought.

War will exist until that distant day when the conscientious objector enjoys the same reputation and prestige that the warrior does today.