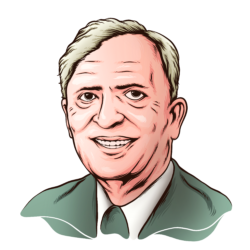 Dr. Joseph Murphy was an Irish author and religious minister, ordained into the Religious Sciences movement in 1946 and then re ordained into the Divine Science movement in 1949, which he then went out to build into one of the largest New Thought congregations in USA. Murphy wrote more than 30 books in his life, with his most famous work being The Power of Your Subconscious Mind, which was first published in 1963 and has sold millions of copies worldwide.

Fill your mind with the great truths of life and walk forward in the light of love.

Stop trying to get something for nothing. There is no such thing as a free lunch. You must give to receive. You must give mental attention to your goals, ideals, and enterprises, and your deeper mind will back you up. The key to wealth is application of the laws of the subconscious mind by impregnating it with the idea of wealth.

Infinite riches are all around you if you will open your mental eyes and behold the treasure house of infinity within you. There is a gold mine within you from which you can extract everything you need to live life gloriously, joyously, and abundantly.

The only path by which another person can upset you is through your own thought.

As you sow in your subconscious mind, so shall you reap in your body and environment.

Over ninety percent of your mental life is subconscious. If you fail to make use of this marvelous power, you condemn yourself to live within very narrow limits.

Trust in the Lord and do good; so shalt thou dwell in the land, and verily thou shalt be fed.

Give all your mental attention to recognizing the absolute sovereignty of the Spiritual Power, knowing that the God-Power has the answer and is now showing you the way. Trust It, believe in It, and walk the earth in the Light. Your prayer is already answered.

Success means successful living. When you are peaceful, happy, joyous and doing what you love to do, you are successful.

Within your subconscious mind you will find the solution for every problem, and the cause for every effect.

A hateful or resentful thought is a mental poison. Do not think ill of another for to do so is to think ill of yourself. You are the only thinker in your universe, and your thoughts are creative.

Just keep your conscious mind busy with expectation of the best.

The process of all healing is a definite, positive, mental attitude, an inner attitude, or a way of thinking, called faith. Healing is due to a confident expectancy, which acts as a powerful suggestion to the subconscious mind releasing its healing potency.

Be still and quiet, tune in with the Infinite Intelligence, and continue in right thought, right feeling, and right action, and you will arrive at your goal.

Trying to accumulate wealth by the sweat of your brow and hard labor is one way to become the richest man in the graveyard. You do not have to strive or slave hard.

God is the source of my supply. His riches flow to me freely, copiously, and abundantly. All my financial and other needs are met at every moment of time and point of space; there is always a divine surplus.

The doctor dresses the wound, but God heals it.

A knowledge of the interaction of your conscious and subconscious minds will enable you to transform your whole life.

Know that in your deeper mind are Infinite Intelligence and Infinite Power.

The secret of guidance or right action is to mentally devote yourself to the right answer, until you find its response in you. The response is a feeling, an inner awareness, and an overpowering hunch whereby you know that you know.

Be sure that your mind never retires. It must be like a parachute, which is no good unless it opens up. Be open and receptive to new ideas.

Pray together and you will stay together. Scientific prayer solves all problems.